The Unlocking Season by Gail Bowen 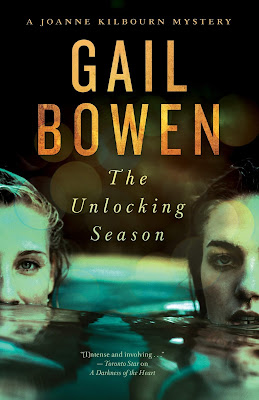 (37. - 1062.) The Unlocking Season by Gail Bowen - It is Easter and Joanne Shreeve (Kilbourn is in her past) is 60 and Zack is doing well and Taylor is in love and her other children are happy and her grandchildren are thriving. Life is good.

Joanne is feeling her way through the development of a 6 part television series, Sisters and Strangers, based on her youth and the startling revelations she has just learned about the identity of her father.

Roy Brodnitz, formerly a dancer, and now a writer for 20 years had been working on the script of the series with Joanne’s aid but he has not progressed beyond the opening two episodes. While in northern Saskatchewan seeking locations for shooting the series Brodnitz disappears. When found he is disheveled and frantic. He has a massive heart attack. He survives the flight to hospital but has another heart attack in the night and dies.

Though a dramatic opening I was not immediately drawn into the book. I think it was because Joanne was not involved. Others are telling her about events. When she gets a greater direct role about 80 pages in I was taken in by the story.

Joanne is caught up in a different form of the arts. Previous books such as Murder at the Mendel, The Gifted and A Darkness of the Heart have explored the artistic mind and the consequences of extraordinary creativity. In The Unlocking Season it is the world of script writing and film production.

Georgie Shepherd, the executive producer and new writer for the series at Living Skies Productions, seeks Joanne’s assistance in developing the script. (With our provincial motto being “Land of Living Skies” it is the perfect name for a Saskatchewan film company.) When Joanne demurs referring to her professional writing experience being a biography Georgie is unmoved:

“They both use sentences,” Georgie said curtly. “Can you be at my office tomorrow morning at nine?”

I can see the author, Gail, being equally no nonsense with a writing colleague.

As always Joanne is on time. As they work the book has excerpts from the script with discussion on structure and purpose and language.

As Joanne is caught up in the excitement of a T.V. production there is a pang for Taylor is leaving home. Through the series readers have experienced Joanne’s joys and fears in raising a talented artist. Now Taylor is an adult. Joanne’s last child will soon be a visitor to her home.

Film is a labour intensive creativity. Where writers and painters work alone a table meeting  on the T.V. production involves 25 people.

Ainsley Blair, who had been Brodnitz’s dance partner, is now the director of the series. Withdrawing into herself after his death creates anxiety within the production.

With so many people involved and a major amount of money invested and creative egos all about there is constant tension around the series.

When Buzz Wells, a slick unscrupulous successful New York film producer / writer, arrives with his own vision on how to make the series a commercial success the tension becomes intense.

Taylor’s partner, Vale, is the star of the series. She is young enough to play the teenage Sally (Taylor’s mother and Joanne’s best friend as a girl). Having been an actor through her teenage years Vale can appreciate Sally leaving Canada at 14 with an older man for New York where she became a successful artist at a grave emotional cost.

Joanne seeks to keep in perspective the prejudice of a few who see the same sex relationship of Vale and Taylor as sinful.

The resolution is cleaner than A Darkness of the Heart. It was predictable but the joy of the series is more in the characters rather than plots that challenge the reader’s ability to identify the killer.

Ultimately, I did not connect as deeply with this book as with most in the series. The Joanne Shreeve books have been rooted in Saskatchewan experiences. I thought this book, the second in a row that involved film making, was not really a Saskatchewan based story. I realized my conception of Saskatchewan stories is based on the province I grew up in. The province has evolved in my lifetime. Films, while not as many as a few years ago, are made here. Gail has a better understanding of contemporary Saskatchewan.

I did wish there was more of physical Regina and Saskatchewan in the book. There are touches of the city and country extending to the film studios but much of the setting is in studios that are bound to be generic.

The family relationships keep expanding. There are a full set of children and their partners and grandchildren. Many of the best scenes in the book are family vignettes.

It would be hard to enjoy the book if you have not read the previous book in the series, A Darkness of the Heart. It is really a continuation of that book. While Gail provides background the emotions are better understood from an understanding of what occurred in that book.

I enjoyed the book but I hope the next book in the series leaves the world of T.V. series.