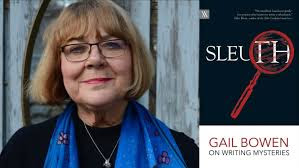 In my last post I started a combination review of Sleuth - Gail Bowen on Writing Mysteries and a tribute to Gail being chosen as 2018 Grand Master by the Crime Writers of Canada. I wrote about Gail's decision to write her sleuth, Joanne Kilbourn, in the first person and her perspectives on evil.


Gail has had the experience of watching an actor say the lines of her character. Six of the early books in the series have been made into movies.

Gail appreciates the attention brought to her series by the films made of her books and the income generated for her. Still she commented on the distant relationship between her written books and the movies made from them:

As enjoyable as the movies are, they don’t bear much
resemblance to my books.

I appreciate that movie makers take books and adjust the stories to what they consider will work in the movie format. (It seems passé to refer any longer to the silver screen or the big screen.)

Gail said Shaftsbury Films wanted to film in Saskatchewan but economics dictated Toronto. I accept movies may need to be shot in locales different from the setting of the story.

Having appreciated and accepted what movie makers need to do I am still frustrated with what was done with Gail’s books. The movie makers changed the setting from Regina to some generic, unnamed if I recall correctly, city in Eastern North America. The plot lines became typical mysteries. Names were anglicized because too many were Ukrainian based.

Whatever the reasons the movie makers lost the soul of the series and the movies became just average.

Personally Gail is deeply engaged with the real world.

It was no surprise to me that she encourages writers to interact with the world and make notes:

Poet Ted Hughes speaks of the importance of “recording moments, fleeting impressions, overheard dialogue, your own sorrows, bewilderments and joys.” Heed his words. As journalist Bill D. Moyers says, “Creativity is piercing the mundane to find the marvelous.” Take notes of encounters with people who fire your imagination.

She encourages the introverted writer to venture into the world and not to be a solitary observer. Now Gail has an advantage in following such advice. She has a zest for life that is inviting. It is fun to be with her. She is filled with energy and ready with an opinion on any topic. At the same time she is ready to listen. On meeting her it is clear she loves being with people. People naturally want to share with her.

There is whimsy in her life. She is the only person I know with a Cold War bunker underneath the back yard of her Regina home. And for anyone wondering, it is not where she does her writing.

Her imagination is not limited to what she creates in her mind. The sides of her back yard fence are adorned with mirrors purchased at yard sales. They provide a striking perspective.

Gail is engaged in the issues of today. She is proudly progressive and it would be inconceivable for Joanne Kilbourn to be a conservative. I do think she would have a hard time enjoying a sleuth who espouses right wing conservative values should they conflict with her progressive principles.

Gail encourages writers to work into their books issues that trouble them. Within her own series she has sought to portray indigenous peoples in roles other than “victims, criminals, or radicals demanding rights or funding”. Gail states:

I have tried to show in my novels the faces of indigenous people as I know them to be: hardworking, proud of their kids, trying to pay off mortgages, bringing great food to communal potlucks, seeking what everyone has a right to seek – the chance to live a good life.

Gail has a gift for voices. I have enjoyed the voices of the characters in the Joanne Kilbourn series. She has consistently followed the advice she provides in Sleuth:

Make sure each of your characters talks in a distinctive fashion. Choose diction that fits the character: too consciously cool, deliberately provocative, pugnacious, pompous, seductive, hypermasculine, butter wouldn’t melt in her mouth, et cetera. Which actor would you chose to say that character’s lines?

One of my favourite sections of Sleuth was her discussion of continuing characters, outside the primary characters, as a part of “what factors contribute to the longevity of a series”.


Great long series have characters who re-appear. I look forward to their return. In the Spenser series by Robert B. Parker I appreciated such characters as Captain Martin Quick and the mobster Joe Broz. In the Gamache books of Louise Penny there are the assorted residents of Three Pines (Clara, Ruth, Gabi, Olivier and Myrna.)  In Anthony Bidulka’s series featuring Russell Quant recurring characters include his mother, Kay, who provides hearty Ukrainian meals and his exotic world travelling neighbor, Sereena.

Gail sets out the role of some characters that have appeared in several books of the series. Most prominent is Howard Dowhanuik. He appears on the second page of the first book, Deadly Appearances. He is a former premier of Saskatchewan and a longtime friend of Joanne's family. He has appeared in seven books of the series and Gail says he will be in future books. As a past leader of the political party of which Joanne is a staunch supporter he can aid in the development of political themes and contemporary social issues. His lengthy personal relationship with Joanne allows Gail to use him to explore family issues.

In the long running mystery series that I love best continuing characters form a community of characters. Functional or dysfunctional they have close relationships that continue for a generation or more.

One of the aspects of Gail's series is that Joanne's family is at the heart of the series. Through the series her children mature and have families of their own. Joanne remarries. I wish more writers went to the effort of such family involvement in their mysteries.

Gail has created an enduring sleuth in Joanne Kilbourn. As a resident of Saskatchewan I am glad that our province is identified by mystery readers through Joanne.

With regard to Gail I hope every reader gets a chance to meet her but do not expect her to fly into your city. She does not venture off the ground in her travels.