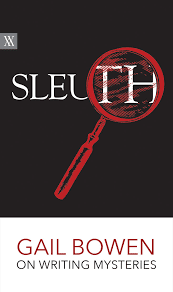 Sleuth - Gail Bowen on Writing Mysteries - A lifetime of reading, writing, teaching and reflecting on the art of mystery fiction is distilled into this slim volume of 144 pages. The book is a master class on the writing of mysteries. Gail's exploration "how" she has applied the advice in the book in the writing of her mysteries makes Sleuth a vivid and fascinating book.

This year Gail was awarded the title of Grand Master by the Crime Writers of Canada. I wanted to extend my congratulations in a post. As I read Sleuth and thought about a review it struck me that I should combine the posts. Thus this post and my next post will reflect on Gail and upon Sleuth.

I openly acknowledge bias. I know Gail. I have visited her. We have exchanged emails.  I have read all 17 books in the Joanne Kilbourn series. She is one of my favourite authors and a wonderful person.

From knowing Gail Sleuth reflects her personality. She is a woman of great learning. She has read widely and thought about what she has read. At the same time she is not burdened by her knowledge in Sleuth. She is not pedantic. She dispenses her advice with flair and self-deprecation.

Only when you note the sources and contacts supporting her thoughts on writing do you appreciate the breadth of her knowledge about the genre and the writing of crime fiction.

I have always believed that principles are best explained by examples. And the best examples are personal examples for they connect the teacher with the student. Sleuth is filled with examples of Gail's writing experiences.

You need not have read any of the Joanne Kilbourn books to understand the examples but readers of Sleuth who have read books in the series will gain a deeper understanding of the stories and how and why they were written.


In a chapter on the narrative perspective Gail sets out why she uses the first person narrative:

I’ve used a first-person narrator for both the Joanne Kilbourn series and the Charlie Dowhanuik series. I’ve also used first person for one novella and one very short piece. It’s a good fit for me. I like getting inside a character’s head, and I like imagining what life must look like through her or his eyes. It’s a personal call, and I seem to slip into it easily, but it might not be for you.

With her confident personality I would have been surprised had she chosen a different form of narrative.

It is no surprise that Gail has thought about evil. Murder is wicked. Life has been deliberately taken.

“First, evil is inherent in all human beings; in other words, it is a character problem….”

“Second, evil is a social problem, created by institutions that diminish or destroy the poor, the alienated, and the powerless….”

“Third, evil is both inherent in who we are and susceptible to growth in a society whose citizens don’t take their moral obligations to one another seriously….”

I consider it telling that in none of her perspectives is the evil doer a monster.

With regard to her murderers she states:

With the exception of three sociopaths, the murderers in the Joanne Kilbourn series are not monsters. They are ordinary people who find themselves in circumstances that, in their minds, justify the taking of a human life.

In creating killers who are not monsters Gail is becoming an exception in contemporary crime fiction. In Michael Connelly’s latest books in the Harry Bosch series the killers have been one dimensional monsters. Recent I read The Taken by Robert Crais. His killers were irredeemably brutal.

Gail rightly emphasizes character development in Sleuth. It is discouraging to me when the least developed character in a mystery is the killer.

I appreciate many readers have little interest in the minds of killers. Maxine Clarke, a blogger friend now gone almost 6 years, told me in a comment on a post where I was lamenting Connelly’s killers:

I agree that his villains can be weak as characters but personally I don’t like reading too much from the “sick mind of the villain” point of view, so I am glad he does not go in for that.

For myself, I think the greatest crime writers are not simply those authors with the best sleuths but those writers who create villains worthy of their sleuths. Gail points to the example of Professor Moriarty. Having Sherlock challenged by the evil genius continues to fascinate readers over 125 years later.