Emails with Gail on A Darkness of the Heart 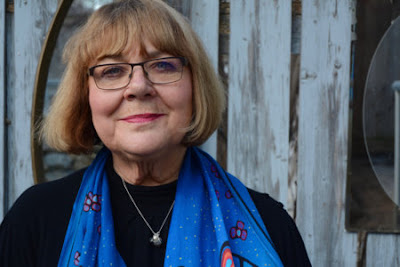 Since reading A Darkness of the Heart by Gail Bowen I have exchanged emails concerning the book. I appreciate Gail taking the time while promoting her book to reply to me:

I just finished A Darkness of the Heart and enjoyed the book. I have posted a review on my blog.

As I read the book certain passages caused me to reflect.

He told me his work is about the magic of paint. I remember his words, so clearly. He said, ‘I start with a blank canvas and then gradually where there was nothing, there’s colour and movement and life.’

I wondered if you start a book with the same thought process of a blank page before you and then words bringing “colour and movement and life” to that page and all the other pages of the book.

Gail: I hadn’t thought of this as my process before, but of course, you’re right.  For me the entire first chapter is preparation. My process is, I guess analogous to a visual artist preparing his canvas -- choosing the tone, colour, texture and brushes he’ll need, and then making decisions about composition, underpainting, blocking in, building up texture, etc. The first chapter takes me forever to write, but I’m a visual person and once the first chapter is in place, the colours, movement and story seem to lead me where I need to go.

I was intrigued by Joanne’s interaction with Gabe Vickers concerning the mini-series planned on the relationship between Joanne, her half-sister Sally Love, and their father, Des.

I think she has reason to be wary of film producers promising to create a series based on that relationship that will bring “the message about the power and limitations of love that will have universal appeal”.

I recall the quote in your book Sleuth – Gail Bowen on Writing Mysteries concerning your thought on movies made from your books:

As enjoyable as the movies are, they don’t bear much
resemblance to my books.

In the contract for the series Zack includes “a clause stating that as the owner (Joanne) of the material upon which the series would be based if, at any time, you were dissatisfied with the direction in which the project was developing and if, after reasonable consultation between Living Skies and you, agreement could not be reached, the option be declared null and void”.

I was surprised the fictional film makers would agree to a clause that would give Joanne a veto over the project even if they had spent millions of dollars.

Do you know if such a clause is common in real life movie / T.V. contracts?

I just read a legal mystery, Errors and Omissions by Paul Goldstein, in which the author, a law professor at Stanford, explores the issue of whether our law should recognize artists as having the moral right to control what happens to their work – paintings, sculptures, scripts as examples – after they have sold their work.

Gail:  I think the exigencies of plot demanded that particular clause in the contract be ironclad. I know that when visual artists sell a piece of art they can specify that that that piece can’t be used in other contexts (e.g. in advertising, posters, fridge magnets, all the stuff you find in gallery gift shops) without the consent of the artist.

I like the idea of ‘reasonable consultation’ between the artist and the buyer, but I think that if no agreement could be reached, enforcement of that clause would be very difficult. Often years pass between the time an option is signed and a project is begun.  If the artist decided to dig in her heels about that reasonable consultation’ clause, I suspect there would be a financial penalty for the artist.  Few artists have the deep pockets necessary for a prolonged legal battle, so I suspect the artist would cave if push came to shove.

As an aside I was caught by your quotation from 19th Century Canadian writer, Catherine Parr Traill providing advice to settlers:

In cases of emergency, Catherine says, “it is folly to fold up one’s hand and sit down to bewail in abject terror: It is better to be up and doing.”

I expect her family found it useful advice when they settled in Western Canada.

Her sons, William and Walter Traill, left Ontario and joined the Hudson’s Bay Company. They were stationed at various posts in Western Canada. After leaving the Company William was the founder of Meskanaw where I grew up. After he died in 1917 three of his daughters – Mary, Annie and Hattie - carried on with the farm for over 30 years. They were fondly and respectfully known as “the Aunts” within the community. My Dad knew them well and admired them. They were strong capable women. Mary was the community nurse. Annie, with the aid of a hired man, was the farmer and Hattie took care of the house. (After Hattie died a widowed daughter, Barbara, became the housekeeper.)

Gail: I’m very partial to both Susanna Moodie and Catherine Parr Trail.  Moodie’s Roughing It in the Bush takes place in an area of Ontario where Ted and I owned land for many years.  4th line Theatre presents outdoor productions of plays rooted in the local history of the Peterborough/Kawarthas area, and we saw a production of Roughing It in the Bush.  The writing was spotty but the drama of Susanna standing at the top of the hill  with her trunks filled with crystal, fine china and other accoutrements of the good life, looking down at the rough cabin that was to be her new home was powerful stuff.  I knew a little about the Western Canadian connection but it’s fun to learn more.  Thanks for the information.

If you are able to reply I would be glad to post your response.