Thoughts at the End of Summer in 2020 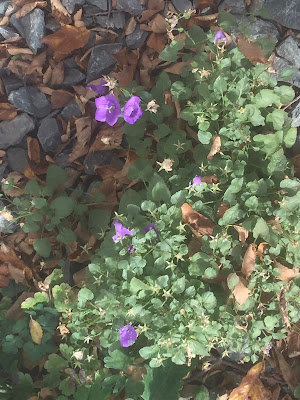 It is a quiet Sunday afternoon in early October. There will be no more sitting outside reading and writing this year. A few golden leaves are still upon our huge elm outside the den window. The winds of Saskatchewan have shaken most from the tree. Yet a stubborn touch of summer has lingered through the early frosts of autumn. A couple of flowers below the window still bloom. The photo is of these last flowers of 2020.

I have been letting my mind drift about books.

Most of my reading is random except for the shortlists for the Harper Lee Prize for Legal Fiction and what was called the Arthur for Best Crime Fiction Novel in Canada. (I say “was” as the directors of the Crime Writers of Canada have chosen to change the logo and name of the annual Awards for reasons that did not convince me.)

Only when I was involved in the memes for the Crime Fiction Alphabet which was hosted by Kerrie Smith at her blog, Mysteries in Paradise, did I consciously read books because of the alphabet. Thus it is a coincidence that I happen to be reading the books that will be first and list in my page of authors read which is arranged  alphabetically.

Leading the list will soon be Mycroft Holmes by Kareem Abdul-Jabbar and Anna Waterhouse. The book got off to an unpromising start describing the murders of small children at a beachfront community in Trinidad. It improved dramatically with a young Mycroft providing unsolicited advice to the oarsmen of Cambridge about to take on Oxford in their annual race. I was captured when Mycroft spoke of his passion for Georgiana and plans for marriage. I have to find out what happens.

Ending the page which now extends to 1,061 books will be An Equal Justice by Chad Zunker. I recently posted a review of the legal mystery set in Austin and provided my evaluation of the book as a part of my examination of the books on the shortlist of the 2020 Harper Lee Prize for Legal Fiction.

There will not be many books that will have author names before “Ab” or after “Zu”.

Occasionally I check on Google for what might appear on a search of my name. To my surprise I found that Sharon Bala had written on her website about the imagined judgment I prepared as an ending for her amazing book The Boat People. She had left the fate of her characters unresolved in the book. Her book has gained her fame around the world. Her comment with links is:

I’ve received approximately 700,000 questions about The Boat People’s ending. So many that I addressed the ambiguity in my FAQs. Dear Reader, You be the adjudicator, I essentially said. Do Grace’s job. Decide Mahindan’s fate.

Bill Selnes, a lawyer and reader in Saskatchewan, took me up on the challenge. Friends, this is really, really good. Fan fiction of the highest order. Bill has written an imagined judgement and you can read it on his blog Mysteries and More from Saskatchewan. And there’s a bonus post script where he tells us how Mahindan and Sellian are doing now.

In a book club recently, I tried to explain (probably incoherently) that The Boat People doesn’t belong to me anymore. It’s out in the world, being read by total strangers. Each reader brings their unique perspective to the book and the story changes subtly each time it is read, by each new person. One of the pleasures of being an author is knowing that your characters are out there living their own lives, separate from you, totally out of your control. Whenever readers tell me about their experience of the book, how they feel about this character or that, it’s a bit like receiving a dispatch from the other side, Mahinder et al sending messages via emissaries. In Bill Selnes’ imagined universe, Mahindan and Sellian are thriving. And I’m really glad to hear it!

Thank you for the kind words Sharon.

Almost inevitably thoughts on the challenges and worries of the pandemic that has dominated the spring and summer crept into my mind as I read of the passing of Northern Ireland poet, Derek Mahon. Included in the obituary was his poem Everything is Going to be All Right. I want to share it with you as it reflects how I do my best to approach trying times:

How should I not be glad to contemplate

the clouds clearing beyond the dormer window

and a high tide reflected on the ceiling?

but there is no need to go into that.

The poems flow from the hand unbidden

and the hidden source is the watchful heart.

The sun rises in spite of everything

and the far cities are beautiful and bright.

I lie here in a riot of sunlight

watching the day break and the clouds flying.

Everything is going to be all right.