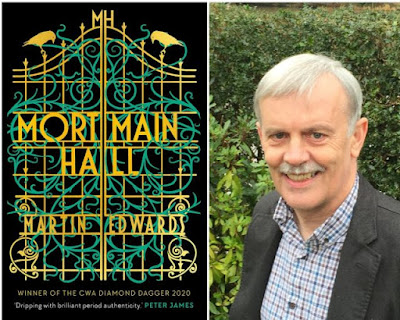 In Mortmain Hall by Martin Edwards, which I reviewed in my last post, there are a series of murder cases where the accused was either found not guilty or the suspect not charged. Those cases and the persons “cleared” play an important role in the plot.

As I was reading the trial of Clive Danskin I realized the facts were very similar to the real life case of Alfred Arthur Rouse which I had read about earlier this year in the memoir, Cases in Court by Sir Patrick Hastings.

Rouse was “a commercial traveler of moderate means” who had “a large number of illicit attachments”. He owned a Morris Minor car and was “thorougly familiar with the mechanism of a motor vehicle”.

In the early morning hours of November 6, 1930 a car went up flames near Northampton. Rouse was seen coming out the ditch a short distance away and spoke to two young men about “somebody has had a bonfire”. Inside the car was the body of a man who was never identified.

There was expert evidence from the Crown at trial of the fire being deliberate through a loosening of a joint between the “petrol tank and the carburettor” but defence experts provided a plausible alternative of the burning of the car causing the loosening.

Rouse caught a ride in a lorry to London advising the driver he had missed a friend in a Bentley who was to pick him up. He went on to Wales to see a young lady whose father thought they were married. He said his car had been stolen.

He told the police that he had picked up a man looking for a lift. They had stopped for Rouse to relieve himself. Running low on fuel Rouse asked the passenger to put some petrol in the tank and had “just got my trousers down” when he noticed his car on fire. Frightened, he said he ran away. He added that he took his case from the car when he went to relieve himself,

Rouse went on to say in a further statement that he was “very friendly with several women” and had been going to sell his home and furniture and make an allowance for his wife.

Though his infidelities were not part of the trial he went into the witness box having told contradictory stories. He should not have testified. With whatever story he told he would be cross-examined on the contradictions. He could hardly admit he had been mistaken in telling different stories. He chose to admit he had lied about his car being stolen. He convicted himself.

Rouse was found guilty and hung. Hastings bluntly stated that:

If Alfred Arthur Rouse had only kept his mouth shut, he would nver have been hanged.

In Mortmain Hall, also taking place in 1930, Danskin is a traveling salesman of women’s silk stockings. During his journeys he establishes relationships with several women not his wife. With his life ever more complicated and debts piling up his car is found on fire in the “north of England” and “a man’s charred remains were discovered inside”. The deceased was never identified. A “distinctive silver tip from the cane Danskin carried was found at the scene”. Originally it was thought Danskin was the victim but he is recognized after his photo is published in newspapers and is arrested shortly before taking a flight to France. The Crown theory is that he decided to fake his death to escape his debts and domestic responsibilities.

He claimed that a tramp had stolen his car and possessions, but this seemed like a fabrication. The police had made strenuous efforts to trace the mysterious limousine, in which he claimed to have hitched a lift from northwest Enland to London, or its driver.

When the Crown closed its case Danskin’s fate was grim.

Everything changed when Major Grenville Fitzroy Whitlow, DSO confirmed Danskin’s statements. He said he had picked up Danskin and given him a ride to London. Danskin told him the same story of the tramp adding that the tramp had assaulted Danskin during the theft. He continued that a “bullnose Morris Oxford” car, Danskin’s model, driving erratically had passed him going the opposite direction a few minutes before he picked up Danskin. With his war hero credentials Whitlow was allowed, contrary to the rules of evidence, to say he believed Danskin. Whitlow’s evidence saves Danskin.

While much of Danskin’s case could be drawn from the Rouse case Edwards makes three critical changes. Danskin did not provide contradictory statements about what happened. Whitlow’s statement that the driver of Danskin’s car was alive when he picked up Danskin provided a perfect defence. With Whitlow’s evidence Danskin did not have to go into the witness box and explain his actions. Had Edwards not made the changes it would have been implausible to have Danskin acquitted.

Beyond one statement that was corroborated Danskin kept his mouth shut and was not hanged.

I have written to Martin, who wrote an essay on the Rouse case, asking if he did draw on the Rouse case and whether I am correct in my belief that he made the changes to achieve a credible acquittal.