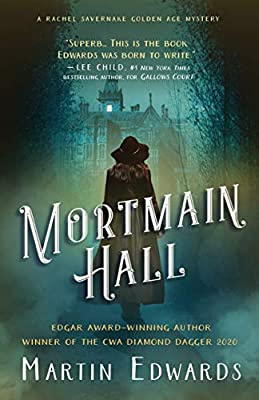 (46. - 1071.) Mortmain Hall by Martin Edwards - Rachel Savernake, with a veil masking her face and “dressed in black from head to toe,” enters the first class compartment of a funeral train of the London Necropolis Company and addresses the only other occupant. He is a “ghost” with a “bushy moustache and beard” acquired during the years he was away from London. It is 1930 and Gilbert Payne has returned from northwest Africa for his mother’s funeral. Savernake tells him:

“I’m offering to save you from being murdered”

and I was smitten.

In the Old Bailey Clive Danskin is on trial for murder. His car has been destroyed by fire with the body of an unidentified man found inside the car. Danskin, a traveling silk stocking salesman, had a spouse and liaisons. Disappearing would let him escape from his domestic challenges. He claimed a tramp to whom he had offered a ride had assaulted him. Journalist Jacob Flint sees a formidable case assembled by the Crown. (I shall have more to say about the case in my next post.)

Savernake, the daughter of a deceased “hanging” judge, resides in Gaunt House, a large home shrewdly acquired in a bankruptcy sale. Residing with her are Clifford Trueman, a “mountainous figure, his wife, Hetty, and his sister, Martha. They are her only servants. Unconventional in many ways Savernake treats them as equals.

With the wealth to indulge her obsession with murder the “formidable” Savernake pursues justice her way. Unsolved “sleeping murders” await her attention.

She has a 300 square foot library filled with thousands of books. Many involve murder.

Savernake had a personal relationship with Flint which ended when he told her that “she treated him like a fool”. The aloof Savernake replied he was “free to leave”. Yet Flint cannot resist the cool beauty.

Savernake is establishing a relationship with another redoubtable woman, Leonora Dobell, who is a prominent ciminologist writing under the pen name of Leo Slaterback. She resides at Mortmain Hall.

Reggie Vickers is passing time defending the Realm from his desk in Whitehall. His passions are drinking and cricket. He is indiscreet about secret information that passes his way but a good fellow.

Various private clubs feature in the book. I would have loved to be a member of the Bookman’s Club. The walls are covered with paintings of distinguished English authors. Conversation flows on books and publishing. The food is excellent.

As Flint probes the dark side of London, Savernake and Dobell plan a weekend at Mortmain Hall. The theme of the country party will be persons either found not guilty of murder or cleared in an investigation. It is a distinction, unwanted to be sure, of being in a select group suspected of, even tried for murder. They have faced death in a time of capital punishment and survived. And why is Savernake invited when she has neither been investigated nor charged?

After a dramatic night out Flint finds himself in a desperate situation. Arriving at Savernake’s home he utters the perfect phrase to gain entrance:

“I’ve got myself involved in a murder.”

Would someone kill to satisfy a perverse intellectual desire to feel what it was like to take a life and get away with murder?

As the country party assembles at Mortmain Hall further bodies fall. (If they were not so dangerous I would love to spend a weekend at a great home in the English countryside.)

Tension is high with the guests acutely aware of their common circumstances and the deep interest of their hostess in murder.

I had wondered how, even if, Edwards would resolve the many threads to the plot. In an almost dizzying narrative all is explained.

It is rare I refer to a blurb but the cover comment by author Lee Child is perfect:

“Superb … This is the book Edwards was born to write.”

Edwards has written an impressive addition to Golden Age Detective fiction. I am sure the giants of that era such as Christie, Marsh and Carr would appreciate the novel. Ms., or should it be Miss for the Golden Age, Savernake has a keen understanding of human nature and the essence of murder. Her creator’s vast knowledge of the history of crime fiction and his writing skills draw together in a strikingly imaginative series. Edwards is an amazing time traveler in his mind.

Edwards, Martin - (2018) - All the Lonely People and A Dislike of Cynical Lawyers