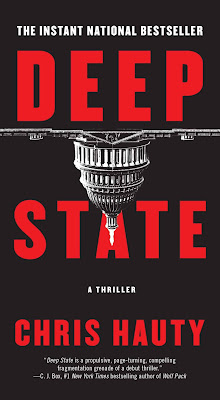 (4. - 1076.) Deep State by Chris Hauty - Hayley Chill, 5’ 8” and 125 pounds, is fighting Marcela Rivas, 6’1” and 145 pounds. Chill is a good boxer. Rivas is a great boxer. Chill is from ARSOUTH while Rivas is from 1st Armored Division to the north. Chill is proud to represent the U.S. Army Southern Command and intends more than a “valiant stand” against Rivas. She is a cunning battler who fights to win. Battered, with a broken nose, she baits Rivas into an attack and delivers a powerful counter punch that knocks out Rivas.

Leaving the army she moves to Washington, D.C. to intern at the office of Peter Hall, the White House chief of staff.

Hall had been chosen by President Richard Monroe, a populist war hero, elected the previous year. Elected to bring change Monroe will rely on Hall’s long experience in Congress to “effect his controversial agenda”.

The pretty Chill, as a young woman with a West Virginia accent who had served in the military, is regularly underestimated. The former combat engineer, who came through a challenging upbringing ignores the condescension. She downplays her photographic memory.

Hauty has an unusual approach in discussing, after their introduction into the book, the future of characters long after the period covered by the book. It is intriguing while somewhat distracting.

President Monroe has bold initiatives. He considers NATO a “relic” and would like an “alternative, eastern Europe alliance reflective of the new world order”. Monroe is convinced that China is the greatest danger in the world. Alliances are needed to counter growing Chinese power. I was impressed that major geo-political issues are inserted into a conspiracy thriller.

Monroe’s confrontational style produced strong reactions. He has been reversing progressive programs and initiatives since being elected.

Hall tells her powerful forces want him and the President dead:

“The people who actually control this town, the shadow government. Of ‘deep state’. Call it what you will, they are a hybrid association of elements of government joined with parts of top-level finance and industry that effectively govern the United States, and without consent of the electorate …”

Chill finds Hall dead of an apparent heart attack yet there is  a recent footprint on the walkway outside his house. She must decide if his cause of death was natural or “the handiwork of a deep state conspiracy”.

Chill faces the challenge of everyone who has identified a conspiracy but not the conspirators. Who can she trust?

Can the President really be at risk of assassination by the Deep State?

Chill decides to trust Asher Danes, a gay staffer at the White House. While clever and witty Asher has neither a military background nor martial fighting skills nor a steady mind when facing trouble. It is gender role reversal for a thriller. It will be up to Chill to handle the fighting.

Chill starts to unravel the conspiracy by being observant and thoughtful rather than violent and reckless.

The conspirators are credible. They ask the question of what to do with a radical President whose decisions are affecting the stability of the world. Is the President of the U.S. putting at risk the peace in Europe that has endured for 75 years?

On the matter of one man’s power, Mikael Gorbachev effectively brought about the destruction of the U.S.S.R.. by his decisions in the late 1980’s.

It is clear Hauty was inspired by the Deep State rhetoric of devout Donald Trump supporters. They were convinced there was a Deep State conspiracy intent on thwarting and threatening their hero.

The best conspiracist fiction writers create conspiracies with an essence of credibility. Hauty, in the tradition of Robert Ludlum, has invented a conspiracy more than believable enough to sustain the story. Beyond the action there are real issues on the future of the world. Every American President, while wrestling with all the loud voices of 21st Century America, must consider how best to protect the nation against foreign threats. In a polarized society dissenting views may be violently expressed.

There was a startling twist I had not anticipated at all. While the twist was clever its unfolding somewhat diminished the ending.

Deep State is an impressive debut. I have the next in the series, Savage Road, and will be reading it promptly.