Indians on Vacation by Thomas King 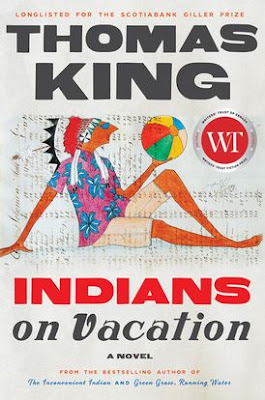 (5. - 1077.) Indians on Vacation by Thomas King - Blackbird Mavrias and Mimi Bull Shield have a marriage in which Bird spends a lot of time listening to Mimi. Her opinions are endless. Bird has accepted it is easier to follow Mimi.

They live in Guelph. Mimi is from Standoff on the Blackfoot Reserve in southern Alberta. Her mother, Bernie Bull Shield, is “well supplied with strong opinions”. When they visit the Reserve Bird gets to listen to the views of mother and daughter on many subjects.

The morning after arriving in Prague Mimi is interested in the major tourist attractions such as the castle, the Charles bridge and the zoo. After reflection she decides upon the bridge. When Bird mentions they walked it the previous night Mimi says “Everything looks different in the light”. Upon the bridge of 30 statutes Bird knows some are more popular with spots “rubbed golden”. He concludes:

Evidently, one of the tourist activities in Prague is

They take photos of each other doing some rubbing. Mimi advises Bird he has rubbed the wrong spot on one statue. As they wander Prague they see more statues being rubbed.

Getting lost on their way to the Kafka Museum seems appropriate.

In Mimi’s search for experiences they eat at a North American Indian themed pizza place. In their travels they have visited several places and events in Europe showing the European fascination with North American Indians. They choose the Black Bear pizza over the Geronimo pizza.

Mimi lives life by the motto “you’re only old if you want to be old”. Bird is adept at negative thoughts.

In Canada she gave Bird the choice of therapy or a dog. When he chooses a dog they visit a shelter. They leave without a dog finding themselves unready to take an aging dog. Mimi buys Bird a small stuffed dog at a thrift store. She calls the dog Muffy:

“And when we travel,” says Mimi, “if the two of you become inseparable, we can throw her in a suitcase and take her with us.”

Bird would love to live on the west coast of Vancouver Island where it is never too hot nor too cold and “where the dominant colour is grey”. Mimi craves sunshine.

Their search in Prague involves Mimi’s long deceased Uncle Leroy Bull Shield. A traveling man in the early 1900’s Leroy disregards the pass system of the time. (For decades before 1950 Indians could not leave reserves in Canada without a pass from the Indian agent. South Africa adapted the system for apartheid. The pass system is but one of the forms of discrimination against Indians in Canadian history.)

With Leroy’s attitude to the reserve Indian agent and his tendency to make ill-advised decisions when drunk trouble was inevitable. The conflict involved the creative use of cow poop. Leroy’s story is funny, satiric, sad and a very clever form of resistance.

Chased from the reserve he joins a traveling Wild West Show and goes to Europe never to return to the prairies. He takes with him the family bundle called the Crow bundle. A hundred years later Mimi and Bird search for the bundle on vacations.

As their time passes in Prague Bird and Mimi find the time in a foreign land prompts assessment of their lives and relationship. They are both senior citizens. They have not saved the world. They have learned a variety of life lessons. They are still together. They are people I wish I could meet whether on vacation or in Guelph.

There is the sly teasing humour throughout the book that I have experienced in talking with many of my Canadian Indian clients. There is an edge but rarely sarcasm. The humour nicks rather slicing deep into the psyche. My mother might have termed it saucy. King is the rare talent who can put to paper Indian irony.

The story flows easily with the pages passing by. King is an excellent storyteller. Few books can keep me smiling while reflecting on cultures, historical injustices, personal demons, randomness on vacation and spousal relationships. It is a great book with the potential to be read long into the future. I enjoyed every page.

King, Thomas - (2019) - DreadfulWater and The Humour of Thomas King