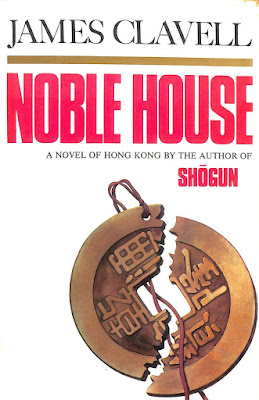 (6. - 1078.) Noble House by James Clavell (1980) - At midnight, in the midst of a typhoon, on June 8, 1960 Ian Straun Dunross swears the oath required to become tai-pan (supreme leader) of Straun’s in Hong Kong. He becomes the 11th tai-pan of the trading company known as the Noble House of Asia. Straun’s was founded in 1841 by Dirk “Devil” Straun. As tai-pan Dunross “hath, total, absolute authority”. As demanded by "Devil" Straun he also swears “before God to commit any deed necessary to vanquish, destroy and cast out from Asia the company called Brock and Sons and particularly my enemy, the founder, Tyler Brock, his son, Morgan, their heirs ...” A grand saga has begun.

Three years later Dunross is aggressively pursuing the international expansion of the Noble House. No longer will it be limited to being a Hong Kong trading house.

Is Bartlett there to make a deal with Dunross or out to capture Straun’s or snap up one of its competitors?

Is John Chen, the 5th Chen compradore to the tai-pan in the history of Straun’s, ready to  betray Dunross through a secret deal with Barlett?

Where will Dunross find the millions needed to complete the purchase of a pair of huge cargo ships being constructed for Straun’s in Japan?

The stock market’s rising but substantial shares of Straun’s are being purchased by unknown buyers.

Quillan Gornt of Rothwell-Gornt is an implacable adversary of Straun’s and willing to work with anyone to destroy the Noble House. The animosity stretches back generations.

But first the elite of Hong Kong gather to celebrate the tai-pan’s 20th wedding anniversary. Ian and Penelope met in England where he was a Spitfire pilot.

It is still an era in Hong Kong dominated by England. English civil servants are appointed by London to administer the colony while the descendants of the earliest traders such as Dunross dominate business. They expect the Chinese residents of Hong Kong to know their place. At the same time, while maintaining polite facades, the Chinese look down upon the uncivilized foreign devils.

There are traditional Chinese leaders such as Four Fingers Wu who commands the sea faring Haklo floating villages.

Complex Chinese family networks share information. Claudia Chen, controls Dunross’s schedule and the office staff. Having spent 42 years working at Noble House and having cousins everywhere she has unparalleled intelligence on the colony.

Meanwhile, Casey is frustrated with the chauvinistic Noble House male executives who, despite her status as Treasurer and Executive Vice-President of Par-Con, are reluctant to negotiate a business deal with a woman and resent her.

The personal feuds turn business competition into great drama. The duelling tai-pans personally appear on the floor of the Hong Kong Stock Exchange buying and selling and short selling shares as rumours rocket around about the trading houses and banks. The stock exchange is Hong Kong’s largest casino with huge numbers of the population participating.

And there are the spies of the United States, Communist China, Nationalist China and Great Britain chasing secrets.

The cast is massive with each provided a distinct character.

The multiple overlapping storylines portray a Hong Kong of great energy and opportunity. It is no place for the meek and mild. At the same time fortunes can be lost as swiftly as they are created. Laws are few. The elite favour the atmosphere of the Wild East. Relationships are everything.

After 1,200 pages I was ready for 1,200 more. Clavell was a master storyteller. I have not read many grand historical sagas in recent years. Maybe it is time to return to reading some epic tales.