The Royal We by Heather Cocks and Jessica Morgan 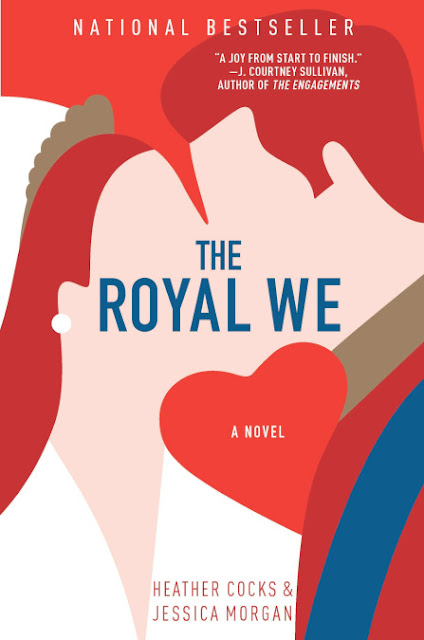 (7. - 1079.) The Royal We by Heather Cocks and Jessica Morgan -  Rebecca “Bex” Porter is about to marry Prince Nicholas of the House of Lyons in London. With 2 billion people expected to watch the ceremony preparations are intense. Among the thoughts swirling through her mind are how to walk down the 300 foot aisle of Westminister Abbey in the “biggest skirt of her life”. Her wedding “gown has its own room” at the hotel.

How she reached the pinnacle of princess dreams fills an additional 552 pages.

Bex grew up in Muscatine, Iowa. She came to England to attend Oxford. There was no plan to find a prince. She is on an exchange from Cornell University and happened to exchange with a girl who lives on the same floor as Prince Nick. Her brilliant twin sister, Lacey, in pre-med is completely envious that Bex has the Prince down the hall.

Bex narrates the story. She is a bright young woman with honest emotions. She finds Oxford enchanting as she loves to draw.

There are no instant sparks. She finds it interesting to be living down the corridor but is not in awe. They become friends as she is unpretentious while recognizing his status means he is different. Prince Nick realizes he can trust her not to pass on stories to the tabloids.

Having no experience with royalty of any nation, though I have a gay friend who prides himself on being a Queen, I found it fascinating to see how the commoner from the New World interacts with the most eligible man in the world.

Nick does have some wonderful lines such as claiming knowledge of the painters Holbein because:

“These people painted my entire bloodline.”

Night Nick and Night Bex, mutual insominacs, bond over marathon watching of  episodes of Devour, an American T.V. series involving vampires. It is a series beloved by Bex and Lacey.

Suddenly Bex realizes she is in love with Nick. She understands the fierce competition. Upper class women from across the realm desperately want to be his consort. Bex just wants to be the woman he loves.

Nick’s father, Prince Richard, is manipulative and demanding. If The Crown T.V. series is to be believed he is a cross between Prince Philip and Prince Charles. His mother, Emma, has succumbed to mental illness unable to cope with the royal husband, the royal life and the royal attention of the paparazzi.

Bex’s parents are fine Midwestern folk. They love and care for their daughters. They take the relationship in better stride than anyone else.

After a wonderful start the relationship proceeds at a glacial pace that seems more designed to lengthen the book than add to the story. In real life the Royal relationships proceed far more quickly. And Bex never seemed that patient of a girl.

It was interesting to read of the corrosive impact of paparazzi stalking the Royals. I have been a part of a few media scrums and found them somewhat disorienting. T.V. cameras with bright lights can keep you from seeing the reporters asking questions. I had not truly appreciated the psychological toll of having cameras clicking and rolling every day and every night until reading the book.

Yet Bex is a strong young woman. Her mother says:

“... We used to joke you could stand in the middle of a tornado and find a way to enjoy the breeze.”

Trials and tribulations are to be expected in real life and royal loves. They come full force upon Nick and Bex. Knowing the end result from the opening did diminish the suspense of the “issues”.

I thought I was modestly enjoying the book and not really caught up in the story until Nick proposed. It was as unexpected for me as for Bex. I almost gasped and had a catch in my throat. It was a wonderful proposal that was so right in its timing and what was said.

It was striking how the Royal Family fears and rejects the spontaneity of a free spirit like Bex. It channeled the enormous pressure put upon Princess Dianna as a young woman.

It surely was no coincidence that Bex met the Prince when she was 19.

Had the book been 200 pages shorter I would have enjoyed it much more. I know I am not the target audience but I expect even the most ardent dreamers of royal romance would have been fine with less detail. I did like The Royal We and am interested in the sequel, The Heir Affair, but cannot see myself undertaking another massive 500 plus page read of the semi-fictionalized English Royal family.