We The North by Doug Smith 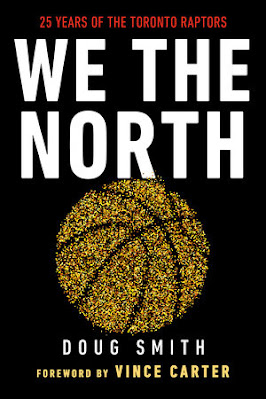 (5. - 1077.) We The North by Doug Smith - I enjoy stories. I love sports books when they are filled with stories. Smith is the ideal writer to tell stories of the first 25 years of the Toronto Raptors basketball team. He started writing about the team before they ever played a game. Smith never gets caught up in statistical analysis. He provides personal illustrations of his perspectives on the team history. The book flows easily.

Smith spoke of the first game being played but days after the referendum in Quebec which by the narrowest of margins, 51%-49%, kept Quebec in Canada. I was in Toronto that week for hearings of the Royal Commission into the Canadian Blood System. I watched the results in a restaurant dreading there would be separation and then relieved when the vote went against leaving Canada.

Later that season I attended a Raptors game at the SkyDome, as it was then known. It was a bizarre experience attending a basketball game in the huge space of a football / baseball stadium. Smith is right in saying basketball is a game meant for more intimate settings though being at the top of a large arena is far from being close to the action.

Smith writes of the challenges in luring Americans north of the border. A quick way for Americans to irritate Canadians is by being negative about Canada without knowing anything about our country. In early Raptor years it was often hard to get American players to come to Canada. Leaving the comforts of the U.S. they feared going through customs, wondered about how to stay entertained, assumed there would be tax disadvantages, disliked the metric system and complained about the weather. Smith says:

Alot of these guys were just petulant little kids.

Thankfully the negative perceptions have decreased but it continues to amaze Canadians how little most Americans know about Canada.

Fair or not, Smith writes with considerably more enthusiasm about the attitudes of non-American Raptor players, mainly Europeans. He says “the non-North Americans just seemed to be more comical, more conversant, more open to bigger things than their traditionally raised teammates”.

It strikes me that the “superfan” of an American NBA team is unlikely to be a Sikh car dealer. Nav Bhatia is the Raptor “superfan” supporting the team all 25 years. (Drake came much later.) Wearing his turban and waving his towel he spends large sums of his own money to sit courtside and go to away games. I consider it a recognition of Canadian diversity when he was given a championship ring in 2019 “on behalf of the organization”.

The Raptors had more than their share of poor years in the first 15 years of the franchise. Smith acknowledges he “tended to give coaches a break”. Close in age, he had an affinity for the coaches who cycled through Toronto for short terms.

Smith clearly established good relationships with players. After a tweet about depression DeMar Rozan chose to talk to Smith about his mental health struggles with fame and feelings of vulnerability. I have had few close relationships as a reporter because I would only see Roughrider players after home games. I did establish a special relationship with kicker, Dave Ridgway, after talking with him after every home game for 14 years. He would occasionally tell me things in confidence.

Some sections of the book would have benefited by greater analysis. Smith sets out how Masai Ujiri built the Raptors who won the 2019 NBA Championship. I would have appreciated more on the decisions that built the Championship team. It is clear that the charismatic caring Ujiri is also ruthlessly competitive, willing to make bold decisions that hurt personal relationships.

I could appreciate the joy Smith personally experienced when the Raptors won the NBA in their 23rd season. I had covered the Roughriders for 10 seasons before they made the CFL playoffs. When the 9-9 team of 1989 made its magical run to win the Grey Cup it was an amazing experience for me as well. Being at the game and able to talk to players and coaches when they had won, coincidentally 23 years after the team’s last Grey Cup win, was a perfect night.

My favourite parts of the book were his personal interactions with players, coaches and executives. I would have loved the book to have been only about those connections.