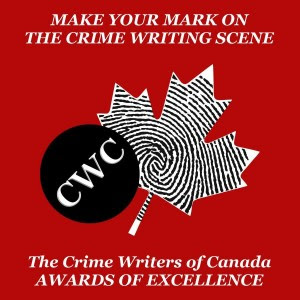 While it is not spring like in Saskatchewan today with a high of +3C there was bright sunshine leading me to hope for better days ahead. Almost every day this time of year when I look at the Rap Sheet blog there is another announcement about a book festival being held online or the release of Award shortlists or announcements of Award winners.

In Canada this week, on Wednesday, April 21, at 7:00 Toronto time the Crime Writers of Canada will announce the shortlists for the 2021 Awards of Excellence. Decisions were made last year to change the Award name from the Arthur Ellis Awards and to adopt a new logo (its image is to the left) instead of the stylized hanged man. I did not think changes were needed but it is time to move forward. With regard to the new I like the logo but regret the generic nature of Awards of Excellence. It reminds me of Awards given for industrial product design. I hope some distinctive name can be used in the future. The Agathas, the Edgars and the Daggers are all memorable. As I recall last year it was thought a reference to the name of a person could be problematic. We are bound for an age of blandness.

As usual the books on the shortlists will be listed on the CWC website and Facebook page.

What is different is that the shortlists will also be announced on the CWC YouTube channel.  Here is a link - https://www.youtube.com/channel/UCyyUHLbCFjz_zJiOgktA9JA/featured

I will be watching at 5:00 Saskatchewan time and posting the shortlists shortly thereafter. In some ways I look forward to the shortlists more than the actual winner announcement. The shortlists are often a surprise and always include authors with whom I am not familiar.

I find it encouraging for Canadian crime fiction that there are 51 books on the long list for Best Novel. It was a surprise to me that Louise Penny’s latest book in the Armand Gamache series is not on the list.

There were 18 books nominated for Best First Novel.

At last there is a category for which I have longed - the Howard Engel Award for Best Crime Novel Set in Canada. The Award is sponsored by the Engel Family and comes with a $500 prize. I respect Canadian writers being able to set their books where they choose. At the same time I consider it important to support the setting of crime fiction in Canada. I know it is far easier for Canadian writers seeking to be published to set part or all of a book in the United States. I expect it is also easier if a book is at least partly in the United Kingdom. There are 29 books in this category.

(I have not tried to determine whether there is any duplication in books in the 3 categories set out above.)

For Best Crime Novella there are 8 entries.

Best Crime Short Story has a list of 37 stories.

Best Juvenile or YA Crime book has 14 entries.

The Brass Knuckles Award for Best Nonfiction Crime Book has 13 books. Recently I made arrangements to get one of the books listed. I hope to read it before the Award winners are announced.

Overall there are an impressive 181 entries! I am looking forward to Wednesday evening.