The Bounty by Janet Evanovich and Steve Hamilton 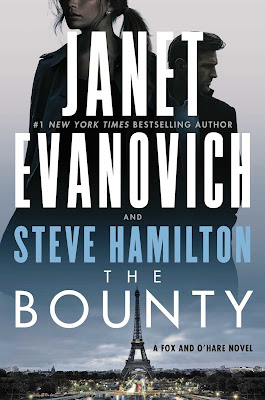 (12. - 1084.) The Bounty by Janet Evanovich and Steve Hamilton - A dynamic opening sees a “master thief” slipping into the Vatican whose security services have been alerted. They are aided by a lovely FBI special agent, Kate O’Hare, and the suave Nick Fox, a “world-class thief. (Kate is a hard driving agent while Nick has shifted sides to assist the agency in challenging investigations.) The combined forces are still unable to prevent the theft of a 75 year old map and the escape of the thief.

The map is a modern treasure map created at the end of WW II by members of Die Bruderschaft (the Brotherhood),”a group of Nazi officals and sympathsizers” as a guide to tons of hidden Nazi gold. The Brotherhood has a new generation of members. Nazis and now Neo-Nazis have served thriller writers well for almost 90 years.

The map was stolen by Quentin Fox, the father of Nick. Quentin was an art dealer who had a secret second career as a CIA operative. It is nice to have a clever 62 year old man swiftly scaling walls, creating diversions and escaping from the dome of St. Peter’s Basilica by an SAS parachute.

Quentin and Nick become a dynamic duo pursuing the gold.

Kate goes rogue, ignoring her superiors, as she seeks to capture the pair. In her past she has caught Nick three times.

In a clever twist Kate’s father, Jake, joins the trio. Few thrillers have heroes joined by their fathers.

Deciphering the map is intriguing. The quartet careens around Europe. The action is non-stop.

It is movie ready. Script writers need hardly do more than recite the existing dialogue. The spectacular settings for scenes are beautiful and dramatic.

It is an excellent classic contemporary American thriller. The story moves smoothly. Bodies accumulate in 8 different countries. I am finding it harder to enjoy thrillers where the good guys casually solve each problem by killing a few more bad guys. I was reminded of the Indiana Jones series.

Readers who enjoy current movies based on comic heroes will love The Bounty.