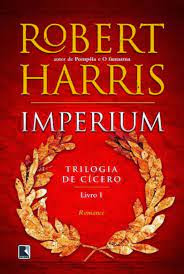 As I have not finished as many books as usual recently I am dipping into unposted reviews from years before I started the blog. Robert Harris has been an inconsistent author for me. Imperium was one of his good ones.

12. - 422.) Imperium by Robert Harris – Harris returns to Roman times. In the last century B.C. Cicero sets out to become one of the two ruling consul of the Roman Republic. The novel is written by his slave, Tiro, who has invented shorthand to take down the torrent of words spoken by Cicero as a lawyer and as a politician. Born into a modest provincial farm family Cicero lacks the 1,000,000 in sesterces to become a senator. He overcomes the problem by marrying the wealthy Terentia. He rises through the senatorial ranks despite lacking a prominent family or great wealth or a successful army command. He succeeds through his wits and golden tongue. Harris portrays a lively Rome. The checks on individual power are being eroded. Cicero must navigate between the ambitions of Ptolemy the Great, Crassus and Caesar. The tension is continuous. The integrity of elections and verdicts are damaged by bribery. Cicero is justly remembered as one of the world’s great orators. He was equally adept at politics arranging coalitions and maintaining relationships. Overall I was sad as I knew of the pending loss of the republic. The Sunday Times description of “masterful” is apt. Harris is among the best historical fiction writers of this generation. I believed I was in Rome. Only as I read reviews did I realize Harris had written a thriller in which the hero killed no one. Hardcover. (Mar. 22/08)