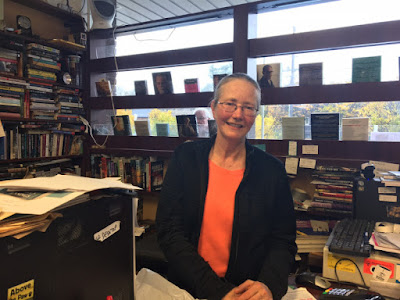 Just over a week ago the Crime Writers of Canada announced the shortlists for the 2021 Awards of Excellence. In addition to the shortlists the winner of the Derrick Murdoch Award was announced. I am proud to say I have known the winner, Marian Misters, for over 30 years. The CWC stated:

The Derrick Murdoch Award is a special achievement award for contributions to the Canadian crime writing genre. As co-owner of Toronto’s Sleuth of Baker Street, Marian Misters has been supporting mystery authors since the bookstore opened and CWC from its inception. Through hosting book events, she has helped launch the career of many CWC authors. In addition, Marian served as Jury Chair for the Awards four years, during which time she streamlined and developed written procedures for the judges. She was also instrumental in guiding CWC to a new, more diverse, Jury Selection Committee format, and has been active on the Awards Committee for five years.

I called to congratulate her on the well deserved Award and we chatted about her life.

Marian was born in England and moved to Canada when she was 11. With her Dad being moved around in the grocery business she attended 17 elementary schools and 4 high schools. She never understood people at university having kindergarten friends.

Marian and J.D. Singh became a couple at the University of Waterloo where they were in a co-op program and trained as accountants. After graduating they worked for a time with accounting firms.

Neither enjoyed accounting. She said J.D. hated it. They looked at business opportunities far from accounting including a popcorn franchise and a printing business.

One day they saw a 2 line ad in the Globe and Mail newspaper offering a bookstore for sale. Intrigued, they went to see Judy Lelkes at her store on Bayview Avenue in Toronto.

Marian said when she walked into the store she instantly knew she needed to have this store. It was the place for her. They made an offer. There was a competing bid. The balance tipped in their favour when they wanted to keep on Bill who worked at the store. The owners did not want him to lose his job. Marian and J.D. wanted him because of his vast knowledge of crime fiction. Bill read 12 books a week.

Her reading has evolved over the years. Initially she read lighter crime fiction such as cozies. Now she reads across the spectrum. She said she has little interest in psychological crime fiction, having no desire to be scared and no need to read writers playing with the reader’s mind. She is ruthless with regard to her commitment to a book. If it has not captured her in 50-75 pages she moves on to another book. If she does not like the characters she does not like the book.

Marian has an endless supply of author stories. I think she should write a book about her experiences with writers.

She said Mark Billingham, while writing taut psychological crime fiction, is a stand up comic and a great person.

Much of her reading is done in her chair in her cottage at her lake. Between martinis and walks with her dog, Pixie, she will read 5-6 books a week.

Back at the store her reading is limited. Marian and J.D. have arranged a unique schedule. The store is open 4 days a week from Thursday through Sunday. They alternate weeks. Marian said she goes hard from morning to night for her days and then has 9-10 days before she returns to the store.

Sleuth has always been a special place for me. Readers are greeted. Discussions over books with J.D. and Marian are encouraged. Beyond the welcome there is a charm to their store, especially their second store on Bayview where there was a rolling ladder along high rows of books and a fireplace. She said they sought in that store to create the feel of an English manor library.

At all 3 of their locations over the past 39 years they have sought to make the store comfortable. They have carpet on the floor. There are furniture tables on the floor to hold books rather than utilitarian tables. They do not want an industrial look. She said they wanted a cozy atmosphere for work. She joked she sprays eau de book every morning.

I recounted in my first post on the store how inviting Sleuth was to our son Jonathan when he was about 12-13:

On one memorable winter visit Jonathan curled up in a chair before the fireplace, was so engrossed in his book that his runners started smoking before he realized he was too close to the fire.

Marian and J.D. have a distinctive relationship. They were married for 20 years. They have been divorced for 22 years. Economics and loving the store kept the business partnership together. Neither could afford to buy out the other nor did they want to sell or close the store. Currently Marian rents a room in J.D.’s home when she is in the city.

As the pandemic continues they are providing curbside pickup to shoppers who can come to the store and mailing out books to online buyers. I just put in an order for the shortlist for this year’s CWC Best Crime Novel.

I do not think I have ever seen Marian without a smile.