An Exchange with Martin Edwards on Mortmain Hall 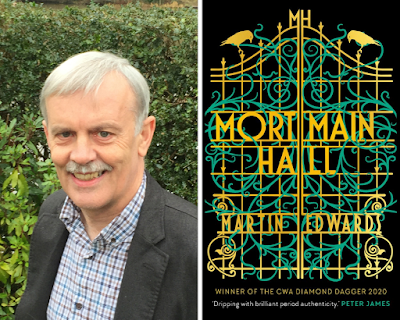 I enjoyed reading Mortmain Hall by Martin Edwards, the justly well known English author / expert on Golden Age crime fiction / solicitor. It took me some time but I wrote to him recently. I appreciated his prompt thoughtful reply. Our exchange is below.

The title of Mortmain Hall caught my attention.

As I read the book I vaguely remembered “mortmain” had some legal meaning but it was not until I was done and happened to be reading the review by Vicki Weisfeld in the blog, Crime Fiction Lover, that I appreciated it was an ancient legal term related to the gifting of land.

The literal translation of ”dead hand” is so evocative.

It has been 49 years since I studied Legal History in law school and I doubt mortmain was a part of my first year studies at the University of Saskatchewan. Our focus was on the Rule Against Perpetuities.

Looking at online definitions I learned “mortmain” actually dealt with legislation, the Statutes of Mortmain in 1279 and 1290, attempting to prevent the gifting of real estate to ecclesiastical organizations where it would stay forever. It was interesting to read how lawyers of that time created forms of trust to evade the limitations in the Acts.

As I went on with some historical searching I found the 1736 Statute of Mormain passed during the reign of George II in which limitations were placed on donors, whether in their lifetimes or by will, to make charitable gifts.

What was unexpected to me was finding 18th Century statute being considered in a Saskatchewan estate case 100 years ago in the 20th Century. When the vast areas of the NorthWest Territories owned by the Hudson Bay Company in Western and Northern Canada officially became part of Canada in 1870 English statutes “in so far as the same are applicable to the Territories”, unless replaced by subsequent English or Canadian statutes, remained in effect.

Saskatchewan became a province in 1905. In 1918, in Re Miller Estate a Saskatchewan judge dealt with the interpretation of a will containing the following clause:

“to Mrs. Jennie Delaney of 89 Marion Street, Toronto, for Christian work or otherwise as she sees fit.”

Judge Elwood determined the 1736 statute did not render the bequest void as he concluded the statute did not apply to the Territories from which Saskatchewan formed. He mainly relied on cases from the West Indies that the statute was only intended to prevent “public mischief” in England and had no effect when not adopted by the Legislature of Saskatchewan.

In a final twist he still found the bequest void for uncertainty.

In my general law practice, which includes work as a barrister and a solicitor, I prepare wills. In the wills I have drafted I have been successful in persuading clients not to seek to rule lives far into the future by their “dead hands”. In recommending against long term trusts I refer to the unknown length of time they will be in place and the limitations on the lives of beneficiaries and unexpected consequences. I often refer to a file I handled as a young lawyer.

In the early 1980’s I was dealing with an estate in which a payment was deposited from England once a year into the bank account of the deceased in rural Saskatchewan. His family did not know the reason for the payment. Through the mails, in those distant days before electronic communication, it was determined it was interest from a war bond. What startled me was that it was a WW I war bond! Apparently the English government was content to pay modest interest on a bond for over 60 years after the end of the war. Further research determined that it had been purchased by the estate of the deceased’s wife’s father. That information meant further research into English court records which determined the will of the wife’s father had been written by hand in the 1880’s (I understand important documents were written at that time rather than typed as commercial typewriters had only been sold for about 10 years). The will provided that the interest from any bonds in his estate went to his daughter and upon her death to her husband and upon his death to some English relatives. Since the ultimate disposition did not involve my Saskatchewan clients I did not try to find out who ultimately received the funds in England.

I am confident no will I have drafted will be administered during the 22nd Century.

I enjoyed your drawing on real life cases in Mortmain Hall. After my review of the book I wrote about the Rouse case which I believe was your inspiration for the fictional Danskin case. I had intended to write this letter earlier but did not get my intentions completed until now. Was I correct that the Rouse case inspired you? Links to my posts are below.

Will you continue to work real life cases, legal phrases and concepts into your books? I hope you will continue to draw upon past legal history.

I will post this letter in my blog in about a week. If you are able to reply and willing to let me publish your response I would put it in that post or a later post.

I admire you for the breadth of your knowledge and writing talent and having carried on an active law practice while being a writer.

Thanks very much for this interesting email. I’m delighted that you enjoyed the book, and I hope that Gallows Court – which is deliberately rather different in style – will also appeal to you.

What I try to do in all my books, to a greater or lesser extent, is to include a wide range of elements that I hope will entertain and amuse (and perhaps, just occasionally, inform) and give the story a distinctive personality. My starting assumption is that, with each book, a ‘typical reader’, if there is such a person, will not necessarily pick up on everything that is there, lurking beneath the surface, but my hope is that there will be enough there to carry most people happily along. Over the 30 years since I published All the Lonely People, my first novel, I’ve been fascinated to see the way that readers have reacted, and the different ways in which different readers and reviewers have responded to those elements.

So my idea with my Harry Devlin books was to combine a gritty contemporary urban setting with an over-arching exploration of a city in the course of recovery from social and economic calamity, and with plots and tropes from the Golden Age. Intriguingly, hardly anyone ever picked up on the GA elements, probably because that type of writing was out of fashion at the time. When I made the GA aspects even more obvious, in The Devil in Disguise, my original publisher rejected the book, since she only liked the gritty elements and wanted more of the same. Fortunately, Hodder snapped it up, but although I’m fairly philosophical about these things, I was surprised that even though the books were in general very well received, so few people recognised what I was really trying to do.

So I tried writing other types of crime novel and trying out other ideas. Take My Breath Away was set in a London law firm and combined a psychological thriller with a satire of the Blair government and the PR business. Dancing for the Hangman was an attempt to provide a psychologically credible explanation of the puzzling aspects of the Crippen case. The Lake District Mysteries deal, among other things, with the nature of life in rural England in the present century and the geography and literary heritage of the Lakes. And so on.

The idea under-pinning the Rachel Savernake books is to take GA and psychological thriller plot ingredients, a Gothic dimension, a study of England in the 30s, and…well, you get the picture. These books are obviously much darker than the typical GA mystery and have a wide variety of ingredients. I was pleasantly surprised to read one blog article discussing ‘drink’ in Mortmain Hall, which made me rather glad that I’d done my homework, and I continue to enjoy the wide range of responses.

I chose the word ‘mortmain’ partly to create atmosphere, but partly to give a clue to the main strand of plot. One of the main ideas was to write a detective novel in which it is far from obvious what central mystery the reader and detective have to solve, and ‘mortmain’ was a sort of hint. Although I’m a solicitor, I’m not an expert in wills or property law, and my main recollection of the rule against perpetuities is of attending a lecture at Oxford on the subject which to a 19 year old was less than enlivening. So I consulted my son, a Chancery barrister, whose input was valuable in getting the facts and law right.

You are right to think that the Danskin trial drew on the Rouse case. As you have no doubt gathered, various other real life cases inspired other elements in the plot, such as the Mahon case, the Thompson-Bywaters case, and the Wallace case. I was also interested to try out various ideas about story structure – starting with an epilogue, the cluefinder, having a lengthy build-up before the characters arrive at Mortmain Hall, and so on.

The next Lake District Mystery, The Crooked Shore, takes an idea from a recent high profile murder case, but the storyline is very, very different. One of its elements is to resolve a puzzle mentioned in the first book in the series, more than fifteen years ago.

I’m currently close to completing the next Rachel Savernake book, Blackstone Fell, and  it will explore the connections between science, religion, rational thinking, and spiritualism – among many other ingredients, including a locked room mystery. There are again one or two legal elements, but these are in the background.

Thanks again. I’m always grateful when people take the trouble to discuss my books in a positive way – it’s very rewarding. I received one delightful and amusing email recently from a reader who had figured out the hidden connection between the names of many of the characters in Gallows Court, but that’s another story…