A Killer in King’s Cove by Iona Whishaw 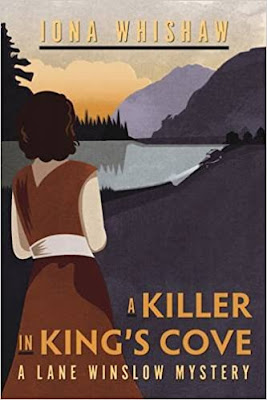 (17. - 1089.) A Killer in King’s Cove by Iona Whishaw - Lanette “Lane” Winslow has left England for the apple orchards of central British Columbia. While her family is English she started life in Latvia. She served England in World War II and now seeks to become a writer in the quiet countryside of yet another country.

Arriving at King’s Cove near Nelson in June of 1946 the lovely Lane finds herself amidst a small group of families with apple trees in abundance. The community is focused around the post office whose post mistress, Eleanor,  provides flowers and vegetables to those picking up the mail. Most of the residents are at least a generation older than Lane.

There is a leisurely opening to the book until a body is found near Lane’s home. Inspector Darling and Constable Ames come from Nelson to investigate the murder. The pace was so languid I almost lost interest.

Just over 100 pages in the reader gets meaningful information on Lane’s life during the war. I would have preferred more of the back story earlier. I became engaged in the book when Lane’s role as a British agent making multiple trips to Occupied France was revealed. Those experiences explain her sangfroid when dealing with a body.

Lane, used to concealing emotions, displays no anxiety when Darling insinuates she knows more than she has told the police.

There is a touch of English formality to relationships.

Lane’s situation is made more precarious by her oath under The Official Secrets Act not to reveal her wartime activities.

As the investigation proceeds, unexpected connections between rural British Columbia and distant England, over 7,000 km away, are revealed.

A back cover blurb from Reviewing the Evidence spoke of the book being “In the vein of Louise Penny ….” While I do not usually read or reflect on blurbs I thought about this comment through the book. I did not find it “in the vein”.

What I did find “in the vein” of was the Maisie Dobbs series by Jacqueline Winspear. Both Lane and Maisie are bright capable women who had an active role in war. Lane was a secret agent. Maisie was a front line nurse in WW I. Neither is intimidated by officious men.

Each women is precise and logical and thoughtful. They have a comparable approach to organizing information in an investigation. Maisie uses the reverse side of cut down rolls of wallpaper. She writes upon the wallpaper the facts and people. She draws lines showing connections. Lane drew a map of the area around her home and wrote up note cards about what happened and about her neighbours. She lays the map and cards out on the floor of her vacant attic. Her knees tire from the extended kneeling as she considers her work. Knee pads or tables need to be in Lane’s future.

Having grown up in a small rural community I thought Whishaw portrayed well the close relationships that develop between families in the country. I knew my neighbours, young and old, well. We cared and helped each other.

I swept through the last two-thirds of the book. The early effort to get involved with the story was worth it. I do plan to read more in the series. I hope subsequent books have a less leisurely opening.