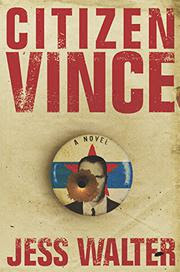 Not having a current review ready I am looking back over a decade to a short review of a book I enjoyed so much it was 2nd on Bill's Best of Fiction for 2008. Walter is a good writer though it has been a decade since I read any of his books. In any event, Citizen Vance, is an exceptional book.
****

8. - 418.) Citizen Vince by Jess Walter – Vince Camden is a donut maker / small time credit card fraudster / smaller time pot dealer in Spokane. He rises each day at 2:00 am to make his rounds of the modest underworld of Spokane before working from 4:00 to noon making donuts. In November of 1980 he is proud to register to vote for the first time in his 36 years. Vince has never voted because he has been felon all his life back in New York. Vince is in the witness protection program because he informed on his gang. Whenit is clear a Mob killer from New York is coming for him Vince decides to return home to make right his misdeeds. While there he finds twists in the story he never anticipated. At the same time he is focused on the presidential and local elections. Politics had never mattered. Interwoven are stories of the final days of the presidential campaign. Vince contemplates on the meaning of life, whether a man can change and for whom should he vote. It is a vivid portrayal of one of life’s losers who is no longer satisfied to be a loser. Alan Dupree is a rookie detective whose subtle mind and stubborn integrity are little respected within the profession. A wonderful book. Hardcover. (Feb. 16/08)