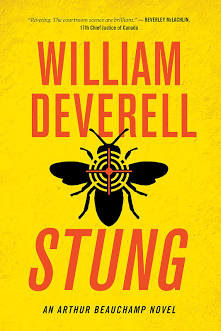 (22. - 1094.) Stung by William Deverell - Bees are in trouble and the Earth Survival Rebellion is initiating Operation Beekeeper to save the bees. The Toronto anarchist group, an oxymoron to be sure, is targeting the multi-national Chemican producer of a neonic pesticide.

Arthur Beauchamp is steadily aging on the Gulf Island of Garibaldi, near Vancouver. He is

“.... deep into his seventies and though physically

He joins the Save Our Quarry (SOQ) committee fighting to prevent an abandoned limestone quarry, currently a park, from being re-opened.

Back in Toronto Rivie Levitsky, a staunch and cute member of the Rebellion, is using her feminine charms to establish a relationship with Howie Griffin, a Chemican executive. While not eager she is not averse to seduction.

The Rebellion makes a raid upon the Chemican plant in Sarnia in which a guard, on drugs, fleeing a beserk member of the Rebellion collapses and is in a coma.

Arthur makes an ill-fated venture into civil law as he clumsily argues against TexAmerica, the company about to re-open the quarry. Subsequently suave Toronto environmental lawyer, Selwyn Loo, flies west. Arthur is relieved to have Loo, who is blind, arrive to save the quarry.

In return, Arthur is expected to take up the defence of the Rebellion in what appear to be inevitable criminal proceedings. Arthur recognizes his diminished courtroom skills.

When arrests occur his wife, Margaret Blake who is leader of the Green Party of Canada, encourages him to defend the Sarnia Seven and Arthur sallies forth to Toronto.

At the fictionally abbreviated bail hearings Arthur wins their release. Cash bail is set for most of the Seven. It was unusual to see significant sums. Most often in Canada you are either released on conditions or held in custody. The judge spends little time evaluating their risk to society if released and little more time on the prospects of their return for court proceedings.

With the bravado of the zealous the Seven embark on a unique defence. They will argue before a jury that their actions are justified as “necessity”. To save the planet they must save the bees which means they must attack Chemican. It is a flashy attention gathering defence but legally dubious.

The book alternates between the high stakes criminal case and the adventures of life on the farm on the fringe of Canada. Somehow Deverell makes both stories compelling.

One of the Seven is facing a manslaughter charge. The Sarnia Seven are true believers to the cause blithely rejecting a plea offer from the Crown that any rational activist would accept.

Back on Garibaldi Island a mountain lion has swum from another island and its depredations of domestic animals raises a furor among the residents.

As trial approaches Arthur remains worried he no longer has the ability to perform in a major criminal trial.

Arthur is aided by a profane, very competent, co-counsel in Nancy Faulk. The parallel, leaving aside the profanity, to my personal legal life is striking.

The lead prosecutor is Azra Khan, the debonair handsome Deputy Attorney General for Ontario, is on a 38 case winning streak. Arthur has his own winning streak at 37. While neither would say the streaks are important, each of the well egoed Khan and Beauchamp is acutely aware of their amazing record of success in the courts of Canada.

Rivie is a capable representative of the Sarnia Seven as she provides the perspective of the accused in this grand legal war.

The trial is quite predictable for Deverell is advancing a cause with Stung. There are striking moments of legal eloquence and deft cross-examinations.

In a scene that I doubt would appear in American legal fiction Arthur learns from Rivie that a juror has spoken to Rivie about the case and her pre-determined position. Following his ethical responsibilities as an officer of the court he reports the contact to judge and prosecutor and the juror is removed from the jury.

It is a very good book with a pair of flaws. First, Deverell lets the book turn into advocacy against neonics. Second, at 540 pages Deverell succumbs to the present writer’s disease to take over 500 pages to tell the story. It would have been a better book at 350 - 400 pages.

I do hope that Arthur has not conducted his last trial, Stung demonstrates he still has the wit, presence and controlled aggression to conduct a trial. If his next trial were not in aid of a cause I would be even happier.