The Historians by Cecilia Ekbäck 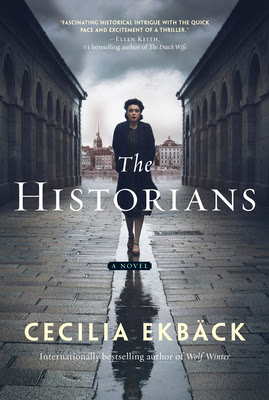 (25. - 1097.) The Historians by Cecilia Ekbäck - April of 1943 is a precarious time in neutral Sweden. Nazi Germany will not tolerate disruption in the delivery of iron ore for war production. Yet the tide of war is shifting to the allies. Tensions, rumours, fear fill the country.

Laura Dahlgren is called from Stockholm to the university in Uppsala where her former college friend, Britta Hallberg, is missing. Laura and Britta had been members of a group of five studying history with the charismatic Professor Lindahl until the war started. Both are lovely and blonde and clever.

Ekbäck offers a powerful definition of the role of history through Lindahl:

“History is about the past, certainly, but it is far more than just that. History is knowledge. Knowledge in the most beautiful, deepest sense of the world. History brings comprehension of what came before us, as well as insight into the future, for in our past lie the seeds of what will come. As the future happens, you will be able to go back and see the roots of each conflict, the reasons, and it will be clear to you why change occurred, or, perhaps more importantly, why it didn’t. It can even give us the road to follow next. And this, my dear fellows, is wisdom. Of course, it is precisely in these times that we must study our history.”

Laura and Britta’s childhood friend, Andreas Lundius Leppo, find her in the Historical Society building. She has been tortured and executed. There is enough detail to convey the horror but not more.

Andreas is Sami. They are looked down upon in that era. Thhe Swedish Institute for Racial Biology conducts measurements of the Sami such as their head size.

In the north Blackåsen Mountain is filled with iron ore. The miners are southern Swedish and Sami.

For the Sami, Blackhåusen is home to a capricious, often violent spirit which does not like being disturbed. The Sami are waiting for that spirit to wreak havoc upon the violators of the mountain.

Jens Regnell, a top administrative assistant to the Foreign Minister, Gunter G-unther, is uneasy as information comes his way about records of phone calls disappearing.

Mysteries are swirling about among the Swedish elite in Stockholm. To the north more mysteries are creating concern.

History is composed of known facts. Historians seek out facts, even ferret out facts that have been concealed. What facts have been hidden that could be of such importance that a university student has been killed and then an archvist have a very suspicious suicide?

The survivors of the group of five re-connect to seek out the facts that Britta was unearthing and thereby find her killer.

There is a conspiracy. Unlike many in fiction it is a credible conspiracy. It fits with the history of that era. Hubris and grandiose schemes and evil are at its core. The conspirators are highly placed in Swedish society and government. They are facing an increasingly difficult situation. If their plans and actions are revealed they are bound to lose status and more as society has shifted against their goals. Yet they are zealots who will not, cannot, end their scheme. The desperate are the most dangerous.

Too many fictional conspiracies reach as far as the absurd. In The Historians the conspiracy is all too real. All countries have darkness in their past. Sweden is no exception.

Tension accelerates as the tentacles of the conspiracy become clearer. The conspirators have proven they have no hesitation about using violence.

The Blackåsen and Stockholm / Uppsala plotlines co-exist in the book. While touching each other I never really found them connected.

In the ending I found a twist too many and more bodies than necessary.

The Historians is a very good book that comes close to great. It will intrigue, even trouble, you on what well educated people will do. It is a worthy member of the Crime Writers of Canada 2021 shortlist for Best Canadian Crime Novel.