Flat Out Delicious by Jenn Sharp 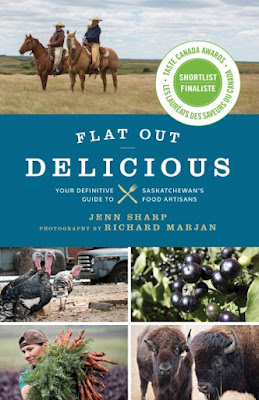 (31. - 1103.) Flat Out Delicious by Jenn Sharp (Photography by Richard Marjan) - Saskatchewan is known for farming. Vast fields of wheat, canola and barley dominate the southern half of our province. While we are known for feeding the world there has been a steady growth in smaller food adventures. Flat Out Delicious is a guide to 167 Saskatchewan food artisans with great photos.

Sharp travelled around Saskatchewan conducting over 150 interviews as she assembled information on farms, restaurants and all sorts of other food ventures.

Not too many years ago Sharon and I would visit markets and unique restaurants in Toronto and Vancouver. On trips to Europe we would marvel at the foods and drinks available in the countryside and wish there could be such food options in Saskatchewan.

For a time I thought the long distances between our communities and the sparse population of the province meant it was too difficult to sustain food artisans. We have just over a million people in a province nearly the size of Texas and almost three times the size of the United Kingdom.

As I live outside Regina and Saskatoon I will focus my review on ventures that I personally know in rural Saskatchewan.

Hodgson Farms is located a few kilometers from Melfort where Sharon and I live. I know Susan and Mark. I see Susan Thursdays in Melfort at their outdoor market venue. The book discusses a pair of their specialities - cantaloupes and oversize strawberries. I was startled when I first saw their cantaloupes for they are grown outside rather than in greenhouses. While frost threatens crops in spring and fall the Hodgsons have learned to grow Halona cantaloupes in Saskatchewan. They have wonderful flavour much more vibrant than the cantaloupes grown thousands of kilometers from Saskatchewan and trucked here. Our granddaughters Hannah (3) and Hazel (2) loved the Hodgson Farms cantaloupes when they visited us this summer.

Just over 100 kilometres to the northeast of Melfort is the Mabel Hill Restaurant and Marketplace at Nipawin. We have enjoyed several meals. I wrote a post (a link is below) about our 40th anniversary meal at Mabel Hill in August of 2019.

Michael Brownlee is the accomplished chef and owner of Mabel Hill. Flat Out Delicious quotes him on his philosophy:

“I wanted to see what’s possible - what you can grow every day and every year and how it can be changed into something absolutely beautiful.” Guests are invited to walk through the gardens, samplying the produce before sitting down for a meal. “The idea is to offer a sense of place.”

He is an excellent host with the occasional special touch for patrons. At a subsequent visit Michael provided us with cantaloupe liqueur. While it came from Italy, maybe someday local cantaloupes will be used.

Last month Sharp and her crew from the Flat Out Food Series were back at Mabel Hill on another long summer tour around the province. On her Facebook page she talked about “harvesting ingredients” from the gardens for the night’s supper.

She provided a photo of a beautifully set up table of their meal at Mabel Hill. 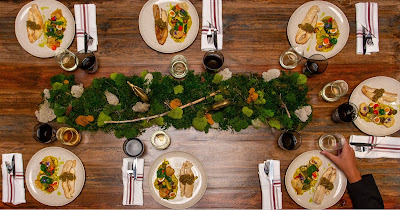 Saskatchewan has some of the best honey in the world. Kitako Lake Honey produces high quality honey about half an hour south of Melfort. I know the owner Steve. I represented his parents when they established the business.

Steve moves his bees to gain honey from specific flower sources such as dandelions or clover. His approach reminds me of my father who was passionate about selling only alfalfa and clover honey from our farmyard when I was growing up at Meskanaw. Dad did not move his hives around but there was enough diversity in the area he could place hives where most of the blooms would be alfalfa or clover.

Unlike our apiary (my Dad never used that official name for a beekeeping business) Kitako creams its honey at “low temperatures so as not to damage the heath properties”. Our honey just naturally granulated.

Kitako has an interesting Facebook page (a link is below).

From my experiences, you can trust the information provided in Flat Out Delicious. Their descriptions are fair and accurate. They do not puff up ventures. It is an excellent book that food lovers can rely on for finding wonderful food places and food people in Saskatchewan. I would savour spending a full summer using the book to go from artisan to artisan around the province.