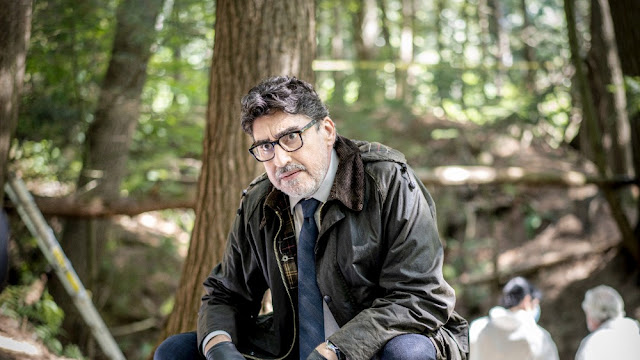 Through the fine blog The Rap Sheet I learned that Amazon Prime will be showing in 2022 a T.V. Series, Three Pines, made by Left Bank Pictures. I am a touch embarrassed that I had not realized a series based on Louise Penny’s books. I say “based” as the Prime press release says it is an “original scripted series”. There will be 8 one hour episodes filmed this fall and early winter.

The T.V. series will be the second time the Armand Gamache mysteries have been put on film. In 2013 the first book in the series, Still Life, was adapted for a T.V. movie which was filmed by and shown on Canada’s public broadcaster, the CBC. Penny was a producer of the movie.

In my review, a link is below, I thought the movie was alright but concluded it was fundamentally flawed by the casting of British actor, Nathaniel Parker, as Gamache. The movie created a lot of interest among the readers of the books. My review is the second most read post on my blog.

I was unhappy with Parker’s “urbane English accents”. That was unfair as Penny had in the books that Gamache learned English while resident in England.

What I consider fair is that Parker never fit my image of Gamache from the books. Both in appearance and mannerisms I did not feel Parker was a distinguished French Canadian.

For the new series English American actor, Alfred Molina, has been chosen to play Gamache. He is also a producer of the series.

Molina has had a wide and varied career. At looper.com he is described as having been:

... in an array of movies and TV shows, including “Indiana Jones and the Raiders of the Lost Ark” and “Chocolat.” However, he’s perhaps best known as the villain Doc Ock in Spider’Man2,” …

“Alfred Molina perfectly embodies the cerebral and compassionate nature of Gamache, and leads a tremendous cast.”

Above is a photo of Molina. In it he is an excellent visual image of the Gamache I imagine from the books.

As to capturing Gamache’s character I will have to be convinced.

It remains hard for me to understand why a French Canadian actor was not chosen for the role. I expect it was an issue of name recognition. Getting a well known English / American actor is bound to be easier to promote but much harder to be credible in the role. Choosing Parker did not go well.

There is style and je ne sais quoi to French Canadians that is difficult to master.

The press release describes Gamache as:

…. A man who sees things that others do not: the light between the cracks, the mythic in the mundane, and the evil in the seemingly ordinary. As he investigates a spate of murders in Three Pines, a seemingly idyllic village, he discovers long-buried secrets and faces a few of his own ghosts.

I pray the series focuses on Gamache as a thoughtful man rather than the typical American detective willing, even eager, to use violence to solve murders.

I am hopeful for the series as Left Bank Pictures produced one of my favourite series in recent years, The Crown.

There is apparently going to be an indigenous component to the series by the indigenous actors named in the release. Indigenous story lines will be a definite departure from the themes of the books.

The press release says Emilia di Girolamo will adapt the novels as lead writer with Catherine Tregenna writing two episodes. Di Girolamo is a British writer who is best known as a screenwriter for the T.V. series, Law and Order: U.K.

In creating a series based on a long running mystery series I wonder whether Three Pines will be more like Bosch or Longmire. In Bosch there was a main story that ran through each season with an individual storyline in each episode. Longmire had a season story but was more focused on a mystery in each episode.

I thought the movie Still Life struggled to capture the nuances of the books. I believe Gamache and the other residents of Three Pines are better suited to a series.

The series is being filmed in the Eastern Townships of Quebec and the city of Montreal where the books have been set so I expect the series to be visually stunning.

What I have been unable to determine is whether Penny has a role in the series. From the press release through various articles none have spoken of her being an active participant. As noted above she was a producer on the movie 8 years ago. As noted in another post, a link is below, I set out some of her reservations over letting her books becoming movies or a T.V. series

Three Pines is definitely a series I want to watch next year.

"P" is for Louise Penny as Movie Producer
Posted by Bill Selnes at 11:01 PM