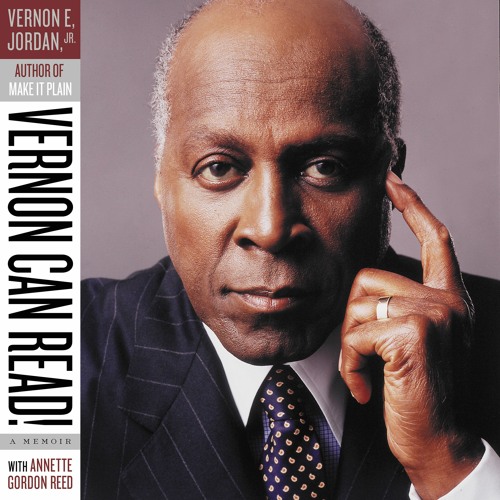 I was drawn to the book Vernon Can Read! by the superb photo of Vernon Jordan Jr. upon the cover. Fair or not, covers matter. I was aware of Jordan as a prominent Black American but no more. Had it not been for the cover I doubt I would have picked up the book.

For approximately 15 years the book sat upon a TBR shelf in our home office. I would look at it and think I should read it but another book would catch my attention. Finally, this fall as I was looking for a work of non-fiction to read I pulled it from the shelf and started to read. Once I started I was caught up in his life and swiftly read the book.

As for the cover photo it proved to be a perfect representation of Jordan.

Throughout his life he dressed elegantly. The photo shows a man with flair and style. As a teenager he spoke of dressing meticulously. I love the combination of blues and textures and designs in shirt, tie and suit jacket.

Over the years, it was impossible to miss Jordan in a crowd. Often that was because he was the only Black person in it. But he was noticeably well-dressed. His suits were attentively tailored and he had a love for Turnbull & Asser shirts, Charvet ties and fedoras. His style was full of European élan, Adam Clayton Powell flair, Wall Street pinstripes and Sunday morning going-to-church polish. His aesthetic drew upon the collage of influences that make this country exceptional but that connect us on common ground. Years ago, after writing about his style — a story for which he did not return my messages — Jordan called to express his gratitude after it was published.

His pose is of a thoughtful man. Well educated and well spoken he reflected on the great issues of American life for over 60 years. He had a natural gravitas.

He gave the commencement address at DePauw University on 3 occasions.

He loved speeches. He studied and refined the language of formal addresses.. As a young man in university he heard in Atlanta an early version of Martin Luther King’s speech “I Have a Dream”.

Jordan won an oratorical university competition as a freshman speaking on “The Negro in America”.

The photo shows a serious man. He dealt with the major issues, especially civil rights, of America. He met with every President from LBJ to Obama. I am not sure about “the Donald”. Jimmy Carter and Bill Clinton were personal friends before they were President. He was awarded over 60 honorary doctoral degrees.

He exudes class, confidence and reserve. He was never an impulsive man. He consulted others, starting with his mother, before every major career decision.

What the photo does not depict is his innate restlessness to move forward and upward and face new challenges.

Jordan wears a wedding ring. He was married to Shirley for almost 30 years before her death from M.S. and was subsequently married to Ann for over 30 years.

His photo is the epitome of the successful business executive and lawyer he was in his life. I have always believed professionals should dress professionally. Casual clothing is best worn away from the office.

Sometimes you wonder if your children are listening to you when something special happens. When my younger son was graduating from law school I wrote to a friend and classmate, a Major in the Canadian Army, congratulating him on his graduation. He replied that Michael had spoken often of me and the importance of looking and acting professionally. He said Michael had convinced him that the uniform of a lawyer is a suit and tie.

It is one of the great cover photos of all time.