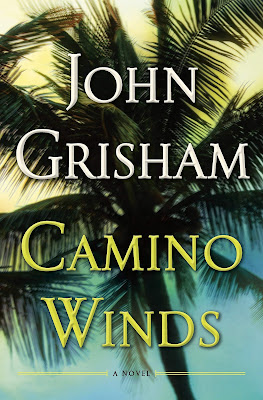 (37. - 1109.) Camino Winds by John Grisham - Hurricane Leo is looming over Camino Island as Bruce Cable, the charming owner of Bay Books, is entertaining author, Mercer Mann, and her companion, Thomas at lunch. They had a brief fling when she was recruited by the FBI to spy on Cable, the prime suspect in the theft of F. Scott Fitzgerald manuscripts in Camino Island.

For supper Bruce hosts a dinner party for Mercer and Thomas at his Italianate home with beautiful tableware and dinnerware and flower arrangements. A fabulous meal with excellent wines, is prepared by a Louisiana chef. Literary residents of the island fill out the table.

That night “Leo finally made his move” towards the island.

By morning there is a mandatory evacuation order which in Florida fashion is discretionary for no one can be forced to leave. Bruce and one young employee, Nick Sutton, stay behind. Store stock is moved to the second storey and first editions taken to his home.

By evening winds have already reached 100 mph roaring and howling about the island. And then it got worse …..

I have never had a desire to experience a hurricane and Camino Winds re-inforced the wisdom of obeying evacuation orders.

Of the island’s literary folk who stayed behind Nelson Kerr is sadly (I hate when lawyers get killed) a casualty. A whistleblower from San Francisco, he has been living a quiet life after leaving the practice of law and is writing international thrillers.

Examining the body Bruce, Nick and another author, Bob Cable, can see Nelson was hit multiple times in the head. There is but one fallen tree branch at hand. Who would have wanted to kill the reclusive author?

In a nifty sequence Nick, an experienced crime fiction reader, lays out his deductions on the crime. The State Police investigator is unimpressed. Nick in turn is unimpressed by the investigator. With mutual disdain they each carry on.

Nelson’s sister and executrix, Polly McCann, arrives from California. Uncertain and grieving, she leans on Bruce for advice.

Reading about a cleanup from a disaster is as depressing as cleaning up. Grisham is not excessive in dealing with the aftermath but the story was not moving at his usual pace until Bruce and Polly decide to pursue the killer.

The plot accelerates as a pair of intersecting plans are made to flush out an informant and the facts worth killing a man. With Bruce leading the way there is abundant adventure and intrigue.

On Camino Island, which plays a lesser role in the second half of the book, six months have passed since the hurricane and life for the locals is returning to its easy rhythms.

Bruce and Noelle have a lovely sunset wedding on the beach. The almost 50 year olds don casually elegant wear for the ceremony:

Noelle was stunning in a white pantsuit with the cuffs rolled halfway up to the knees. Bruce, true to form, wore a brand-new white seersucker suit with shorts instead of pants. No shoes for either.

As always with a Grisham book the pages flow and suddenly 50 to 75 to 100 pages have been read.

I liked Camino Island better. More of the plot was about books. Camino Winds explores the risks in a writer’s life but it is not as unique. I was glad to read more of life on Camino Island.