Going to Beautiful by Anthony Bidulka 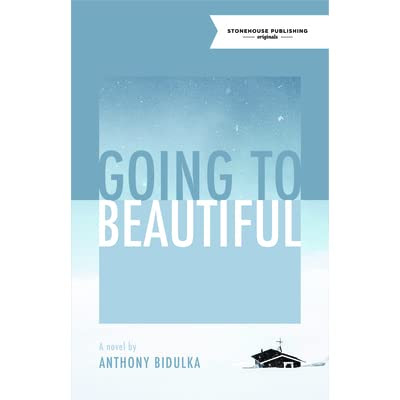 I worked my way through the opening pages of Going To Beautiful where big egos and big successes have put Jake Hardy and Eddie Kravets atop the food and fashion worlds of the Centre of the Universe - Toronto.

I found it interesting how each had benefited from the 21st Century’s celebrity making machinery of reality television. Eddie won the first season of a show featuring a group of designers meeting “increasingly bizarre design challenges”. Jake reached the heights through successful personal journey cookbooks and “a cable cooking show - Jake Hardy Does TV Cooking”. What will the historians of a generation into the future make of our passion for “reality” television?

I admired Jake and Eddie, happily married for 30 years with a thriving son, Connor. Jake knows they have a “magic world”.

I appreciated how crushed Jake was after Eddie was found dead at the base of their apartment building. I understood how questions of “why” flooded through his mind.

Reading of Eddie’s death by falling from  their building, I thought of the death of Chris Hyndman of the Steven and Chris daytime talk show, through a fall from the condo in Toronto he shared with his husband, Steven Sabados. From the intensity of the opening of the book I had the feeling you and Herb might have known Steven and Chris.

As I read through the “I’m dead. Now What?” plan of Eddie, I could not help thinking of you and Herb.

But it was when Jake and his 78 years young transgender friend, Sebastienne “Baz” Venkata Santhosh Kumar Sengupta flew from Toronto to Saskatoon to search out Eddie’s roots in Beautiful, Saskatchewan that the book came alive for me.

In your earlier books characters headed out from Saskatchewan. It was so clever of you to have Jake and Baz see Saskatchewan through Toronto eyes.

Having them come in mid-January truly introduced them to our winter weather and the vastness of our province. They arrived on a nice sunny -20C morning. By mid-afternoon they are in a blizzard. The hospitality to the storm-stayed visitors from the East is a tradition I have always valued in Saskatchewan. The next morning they experience the crystalline winter magic of countryside Saskatchewan.

This is the book I longed for you to write when Russell Quant was carrying on in the big city of Saskatoon and then roaming the world with but quick visits to the family farm. I knew you had a great story to tell set in the farms and small towns of rural Saskatchewan. You capture the landscapes, the people, the communities, the quirks, the moods - the very spirit - of the Saskatchewan in which I have spent my life.

The Ukrainian Saskatchewanian accents of Beautiful residents were perfect.

The joy of potluck meals is infectious. In our Cathrolic parish in Melfort the ladies also gather with joy to assemble and set out the food.

I could see your mother in Shirley presiding over a seemingly chaotic kitchen of helpers readying a huge meal of Ukrainian dishes.

If Jake thought a Ukrainian “stiff one” was 2 ounces of rye whiskey and Coke he was severely underestimating the pour unless his hosts had refilled the rye bottle with some homebrewed liquor. My experiences from Ukrainian weddings are that the punch is the most potent drink in the hall.

The confusion over a snowmobile poker rally was hilarious.

The Convent on the hill reminded me of the Ursuline Convent at Bruno which hosted a boarding school attended by my wife, Sharon, and my sister, Ann Marie, 50 years ago. I expect the Convent at Prudhomme was actually your inspiration.

I enjoyed the vignettes of real life Saskatoon but loved Beautiful.

At the same time you recognized the fragility and decline of most small towns in Sasktachewan.

The closing of the grocery store in Beautiful when it's 92 year old owner fell ill reminded me of the closing in 2015 of Prytula’s General Store in Tway after 100 years when its 87 year old owner, Victor, died. It was an amazing store and Victor loved to talk about the store and his life.

As with the characters of Go To Beautiful, middle aged to elderly, you and I have lived through the fading of the lifestyle in which we grew up. I have regrets that the small town Saskatchewan of my youth and early adult years could not endure but recognize there is still lots of life in the countryside. There is a new generation of immigrants choosing rural Saskatchewan. The neighbours on each side of my home in Melfort are Filipino. My doctor is from South Africa. The lovely young woman who helps with our house is from the Ukraine.  I am confident, as I think you are, that these newcomers to Saskatchewan will also have good memories of life in the country.

I did not need the mystery element to enjoy Going To Beautiful. The interactions of Jake and Baz with the good folk of Beautiful drove the story. I was reminded of the series of books written by Lillian Beckwith based on the time she spent during the 1950’s living on a farm in the Outer Hebrides Islands of Scotland. (A link to my review of The Hills is Lonely is below.) I wish publishers could accept the beauty of a book that does not fit a standardized category.

The last book of fiction set in rural Saskatchewan that moved me as much as Going to Beautiful was Cool Water by Dianne Warren. My review of that book (a link is below) was also in the form of a letter. It was written to the young man who gave me the book.

As Going to Beautiful moved forward I wondered how would you address Jake meeting the family of Eddie, the gay son/brother who moved to Toronto and never returned home and never spoke of his family? I was startled, even shaken, by what happened.

I found the section of the book nearing the end a touch bizarre though still absorbing.

The actual ending was perfect.

In your cover letter forwarding the Advance Reader Copy you spoke of this book as “a very personal novel, with bits and pieces of me spread throughout”. I found the little touches from your life made the story more vivid.

I am so glad to have read Going to Beautiful.

I do not know where your writing career will take you but I consider Going to Beautiful your masterpiece.

Thank you, as always, for your thoughtful musings and insights as you read Going to Beautiful.

As you have no doubt guessed, if it can be said I have an agenda or goal as a writer, it is to create works that highlight under represented settings and characters in a way that is accessible and entertaining.

Whether it's characters who are middle-age+, LGBTQ+ and/or Ukrainian in a setting that may be rural, urban, Saskatchewan prairie or the bright lights of Toronto, I believe there are good stories to be told, stories that are entertaining, important, relevant and celebrate diversity. I am heartened to learn that so many of the passages reminded you, a fellow prairie boy, of versions of your own experiences.

You have rightly identified many of the bits and pieces that came from my life. Indeed, Herb and I have completed our own version of the  “I’m dead. Now What?” plan. Mine includes setting up at least one really extravagant Christmas tree (a beloved hobby), displays of art, and a party atmosphere (after a reasonable amount of crying of course). The book truly encapsulates events and people and places that have woven their way through my life, and in some cases still do.

Your statement, " I wish publishers could accept the beauty of a book that does not fit a standardized category" is important. Going to Beautiful in many ways defies genre, which can be a difficult thing when it comes to finding a publisher, communicating to booksellers and bookstore owners where to put it on the shelf, which readers to recommend it to. I am so grateful to Stonehouse Publishing for recognizing the book for what it is. I knew I was in the right hands when, during a contract negotiation meeting, they spent the first 20 minutes - 20 minutes! - talking about how much they loved the book. I knew these were the people I wanted to work with.

I wrote much of Going to Beautiful during the pandemic era, but I did not want to write about the pandemic. I wanted to write something that might be a antidote, however fleeting and small, something that, in the end, affirmed the existence of hope and joy and goodness. I needed it. Maybe others will too.

Bill, although there is no Beautiful, Saskatchewan on a map, it's there. I know you've been there.