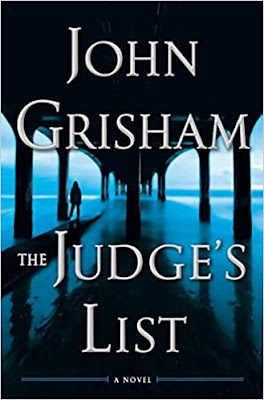 (43. - 1115.) The Judge’s List by John Grisham - Lacy Stoltz is drifting along at the Florida Board of Judicial Counduct dealing with routine complaints against 1,000 judges. Some years have passed since she unraveled massive judicial corruption in The Whistler.

As in The Whistler and with most of her cases there is a complainant in the The Judge’s List with a ficitious name. Meeting the complainant “Margie”, Lacy is jolted by her accusation. A judge is accused of committing multiple murders. Lacy swiftly realizes there is substance to the allegation.

In their second meeting Margie provides her real name. Jeri Crosby, a professor of political science at the University of Southern Alabama, states her father, Bryan Burke, a retired professor of law from Stetson University was murdered over 20 years ago.

The police have gotten nowhere and the FBI are not involved.

Crosby has assembled binders of information on the death of her father and four other murders. The method of killing - a blow to the head followed by strangulation with a rope - is the same in all 5 murders.

Crosby is convinced Judge Ross Bannick is the killer. He has had significant mental health issues and was a former law student of her father who bitterly resented being impaled by Professor Burke through Socratic questioning in first year law. Think of the actor John Houseman, as Harvard Law Professor Charles W. Kingsfield Jr., questioning first year law students in The Paper Chase.

It is clear Judge Bannick has a list of those who aggrieved him and must be punished but how long is the list?

As Lacy starts her investigation Grisham adds major tension to the book when Crosby anonymously advises the judge he is being investigated by the Board and provides poems she has written as if from the dead. She seeks to spook and torment the judge. She is successful.

Judge Bannick starts his own investigation to determine who is behind the complaint. He prides himself on having committed perfect crimes. Now he is at risk. He oscillates between rage and despair. He decides to find the source.

The pages fly by with the parallel investigations by the hunter and the hunted.

While plausible the ending was the weakest part of the book. Grisham took an easy conclusion. A much more interesting finish was available but not consistent with contemporary popular crime fiction.