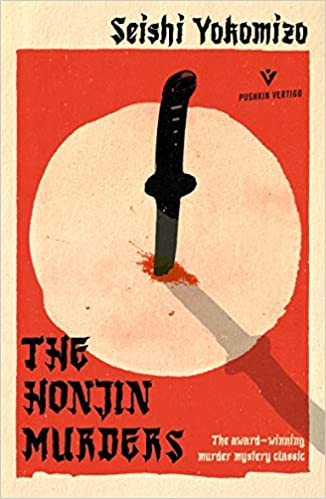 12. - 1127.) The Honjin Murders by Seishi Yokomizo - Translated by Louise Heal Kawai - (1973) - The unnamed narrator, a writer of detective stories, with a fine appreciation of classic locked room mysteries is evacuated to rural Japan in WW II. Curious by nature and occupation he investigates the killings that occurred in 1937.

The victims are Kenzo and Katusko who were savagely slain on their wedding night in the annexe, a house next to the main house. The doors and windows were locked or secured from the inside. About a couple of hours before they were killed, heavy snow began to fall. There were no tracks in the snow around the annexe. There were some muddy footprints going towards the house.

Outside the house are found a bloody katana and bridge. The latter is from a koto (a japanese stringed instrument) which was in the annexe.

Fingerprint analysis shows a mysterious three fingered stranger with a scar slashed across his face, who had been in the area a short time before the wedding, had been in the annexe. His fingerprints are in the blood.

In real life the mysterious stranger committing murder is rare. Yokomizo provides a plausible scenario that he is not so mysterious for a connection is found between Kenzo and a stranger. Can the investigators identify that, distant in time, stranger?

Kosuke Kindaichi, a famed young private detective, is summoned. He is an “unremarkable” looking young man in his mid-20’s - “he seemed stunningly indifferent to his appearance”. Formerly a drug addict he applies “reasoning and logic” to the evidence collected by the police. The narrator associates him with a fictional English detective.

In an intriguing development for mystery book lovers, there is an extensive collection of crime fiction, including locked room mysteries, in the main house. Saburo, who is Kenzo’s younger brother, has assembled the books. Most remarkably, Kindaichi, uses the collection to help him solve the case.

As usual, even though I reviewed past information as new particulars were provided I could not solve the locked room. I returned time after time to the diagram helpfully provided. I had an inkling about what happened but no solution.

I thought The Honjin Murders was not a great book but it is an excellent, very clever mystery.

The translation felt a touch awkward. It seemed as if the characters were speaking in a more modern idiom than 1937.

I was glad I took a chance on The Honjin Murders. I now understand the fame of the author. It is the first Kindaichi mystery. The author blurb says it has never been translated into English until now. There are an additional 76 books featuring Kindaichi! I am going to have to read more of them.