Sharon and I spent last week in San Rafael, California. She was in residence at the campus of Guide Dogs For the Blind (GDB) working on orientation and mobility skills. While Sharon was at GDB I had some time to explore Marin County and go across the bridge to San Francisco for the first game of the Golden State Warriors series with the Dallas Mavericks. When I travel I like to visit bookstores, libraries and sites with a literary connection.

On Sunday I had a late lunch at Sol Food, a Puerto Rican restaurant. It has a boisterous atmosphere and the food was pretty good. I was assigned a stool at the bar. After lunch I visited the Copperfield’s Bookstore in San Rafael.

I was looking for and found a copy of Stacey Abrams book, While Justice Sleeps. I am currently reading the book. It is a well written book involving the death of a U.S. Supreme Court Justice. One of his young clerks, Avery Keene, finds herself unexpectedly in the midst of a legal and political turmoil.

Browsing further I came across The Bookseller of Florence by Ross King. While I minimize reading blurbs I was drawn to the book which is subtitled “The Story of the Manuscripts that Illuminated the Renaissance”.

After looking online I decided to go shopping for some colourful shirts at Louis Thomas Fine Mens Apparel in Corte Madera. It was a fine store and I came away with a pair of shirts, one featuring red flowers and the other a purple on purple design.

My salesman, Mark, recommended lunch at Pacific Catch a block away. I had a fine trio of seafood (shrimp, salmon and sea bass) with Mexican spiced corn on the cob and crab mashed potatoes.

I had not planned a bookstore stop but nearing the freeway I saw a sign for Book Passages. I succumbed to temptation. It was a wonderful store. There were thousands of books and a nice area for author events. I could have bought lots of books but my TBR piles are building again and I had just ordered four books from Sleuht of Baker Street from the shortlist for the Best Crime Fiction Novel set in Canada Crime Writers of Canada. In the end, I rationalized I had to buy a book and choose The American Agent by Jacqueline Winspear. It will be the 16th book in the Maisie Dobbs series I have read.

On Wednesday I went out to West Marin County. I was surprised by how rural the County is once you get a few kilometres west of the 101 Freeway. I wound my way around and up and down the hills, usually going no more than 35 mph. With no ditches I drove through a small forest with the trees but a few feet from the roadway. It is a farming and ranching country. I felt like I was back in rural Saskatchewan except for the hills. And it is just over an hour from the heart of San Francisco.

I made my way to Nick’s Cove Restaurant on Tomales Bay where I had 6 excellent raw oysters. I wish I had ordered a dozen.

I drove down the coast to Point Reyes Station where I found Point Reyes Books. It is not often there is a bookstore in a town of 850 people. It has been there since 1969 with a series of dedicated owners. It is a very nice bookstore with a good selection of books. They mystery section is modest but I had to buy a book to support this independent bookseller. I found Winter Counts by David Heska Wanbli Weider which is about Virgil Wounded Horse, an enforcer on the Rosebud Reservation in South Dakota.

Thursday I went down to Sausalito for lunch at Scoma’s. It is a beautiful restaurant set on a small pier into the bay with downtown San Francisco in the background. The baked oysters I had were alright but I should have had the raw oysters.

Noticing the library was nearby I went for a visit. What I found most interesting were a pair of programs. For children they offer Reading to a Dog. It is focused on children who do not feel comfortable reading aloud. They are given a chance to read a book to a dog the staff described as loveable and patient. For teens and tweens they have set up a weekly Dungeons and Dragons board game with a staff member creating adventures.

Back in San Rafael I stopped at the library. What caught my attention was the mystery section. It wrapped around half of one outside wall and more than half of another wall. It just went on and on with multiple books by many authors. One way I distinguish significant collections is whether they have some lesser known but 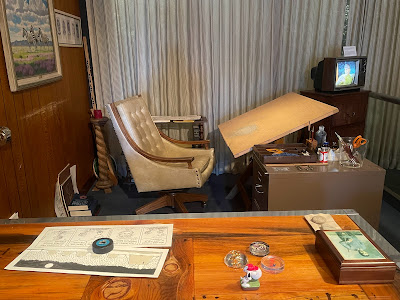 quality authors. I was happy to see they had several Inspector Chen books by Qiu Xiaolong.

On Friday I went north to Santa Rosa where I visited the Charles M. Schulz Museum. It was great to step back into the world of the Peanuts comic strip. Over 20 years have gone by since the last original strip was published. 2022 is the centenary of Schulz’s birth.

I went through the gallery setting out his development as a cartoonist and the history of Peanuts.

On the second floor they have re-created his office where he drew the strip on a simple easel while sitting in a comfortable chair. A photo is above. I was reminded of my visit to Hemmingway House in Key West where his writing room was restored.

Also on the second floor was a bright room with papers and pencils and crayons so you could draw for yourself. I decided to draw a picture of Snoopy on his doghouse flying off to face the Red Baron. A photo of my effort and the original is below.

Most vividly I watched one of the T.V. shows featuring Charlie Brown and the cast of Peanuts. It was about Charlie Brown competing in a school decathlon. As usual, he tries hard and comes close but fails to win. He is comforted for trying hard and being a good guy.

I wonder if that show could be made today. We have become a contradictory culture. Winning is emphasized in sports. At the same time children are shielded from losing through participation awards. I am glad to see recognition for taking part but losing is a part of life. Charlie Brown lost all the time in ball. He was frustrated but he kept playing and trying. There is much to be learned from losing in sports events.

On the way out I took the photo at the top of this post of our hero. I love you Charlie Brown.