Bills 2019 Best of Non-Fiction and Most Interesting 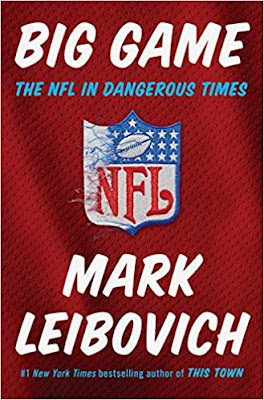 In my last post I discussed my favourite fiction reads in 2019. This post deals with Non-Fiction and a category of my own, Most Interesting.

With regard to Non-Fiction -

1.) Big Game - The NFL in Dangerous Times by Mark Leibovitch - The “dangerous times” relate to the head injury issues of football players. He provides a serious look at the consequences. The problem, as happened with tobacco, appears to be evolving to football players choosing to voluntarily taking the risks of brain injury.

More interesting to me were the observations and stories from the many interviews he conducted with team owners. These billionaires, every franchise if worth over a billion dollars, are interesting even eccentric. How good they are at business is less certain for the league’s ever expanding revenues make it difficult to lose money.

Jerry Jones, the very public owner of the Dallas Cowboys, relishes talking to reporters no matter the consequences for his team. This past fall he created turmoil over his negative comments when the Cowboys lost games. His ego is Texan big.

2.) 47 Days: A Journey Back Home by Amanda Perot - The author, who resides less than 50 km from Melfort, undertook a 47 day journey in 2018 of personal discovery after her marriage failed and she was doubting herself. She wanted to meet Saskatchewan women who had or were suffering adversity and see how they were addressing their issues. She financed the trip with the sale of decals and t-shirts.

She called her trip Saskatchewan Sisterhood - The Power of Women’s Voices. On the trip she held presentations to which women were invited to share their stories.

Her writing is passionate and profane. Amanda is a woman of strong emotions.

I enjoyed the book greatly. I was able to see in my mind every place she traveled around Saskatchewan on her journey of 5,820 km.

3.) Florence Kinrade - Lizzie Borden of the North by Frank Jones - I enjoyed the book and disliked the title. It was too much an effort to capitalize on the notorious American murder case involving Lizzie Borden.

I do not read a lot of true crime. I have enough of that at the office. I did find interesting the story of Florence Kinrade who was suspected of killing her sister, Ethel. Florence asserts the killer was a tramp.

Her family, prominent members of the Hamilton establishment, closed ranks and there was a shoddy police investigation.

In a dramatic inquest, a well known Toronto lawyer, aggressively questions Florence about her implausible story and an unexpectedly adventurous life.

With regard to Most Interesting I have a trio of books:


“Hammerhead” Jed Ounstead is a former pro wrestler and bouncer who gained his nickname by breaking 2” x 4” boards over his head after winning a match. His initial investigation concerns a kidnapped snake.


The world of minor professional wrestlers is unpredictable and unconventional and entertaining. I think Devlin is about to become a very well known author.

2.) Bird's Eye View by Elinor Florence - Saskatchewan farm girl Rose Joliffe is anxious to support the war effort by joining the military as WW II begins. She is frustrated for two years as there is no role for women. Eventually she enlists in the English Women’s Auxiliary Air Force.

Upon learning of her experience in taking photos she is assigned to a unit developing photos. Her intelligence leads to a position analyzing air photos taken by reconnaissance pilots. I found fascinating how much information could be gleaned from skilled examination of these photos.

3.) Crazy Rich Asians by Kevin Kwan - I was entranced by the world of super-rich Singapore Chinese families. A million dollars is a pittance. A billion dollars a starter fortune.

The lovely Rachel Chu, a professor in New York City, has no understanding of the prominence and wealth of the family of her boyfriend, Nicky Young. Invited to a wedding in Singapore she is stunned by the attitudes and way of life of his family and friends. They cannot conceive of her disinterest in money.


The men are relatively uninteresting as they concentrate on business. It is the women, especially the mothers of adult children, who are in constant conflict and never ending scheming. They are compelling.

I found Crazy Rich Asians so interesting I promptly read the remaining two books in the trilogy.

A Happy New Year to all readers.