In This Grave Hour by Jacqueline Winspear 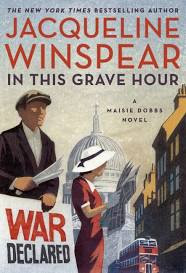 (18. – 1043.) In This Grave Hour by Jacqueline Winspear - The title quotes the famous speech of King George VI as World War II begins in September of 1939. As England goes to war the shadowy Dr. Francesca Thomas of the Belgian embassy contacts Maisie to investigate the death of Frederick Addens in London a month earlier. He had been forced to kneel and then was executed by a single shot to the back of his head. Addens had been a Belgian refugee in World War I. Scotland Yard, busy with all the issues of going to war, has been content to resolve the case by classifying it as a killing during a theft. Maisie accepts the case on the terms she will be paid her regular rates for her work.

Six years have passed since Maisie left England with James for Canada. After a couple of years of grieving over his death she has resumed her business in its former location. Billy Beale and Sandra Pickering are also back at work with her. I gave a contented sigh that the team was reunited. The pair of intervening books had been interesting but I was grateful for Maisie’s return to being a psychologist and investigator in London. The series works best in England.

“..... Putting down every thought, every consideration, on a large sheet of paper to better see threads of connection. But he always used thick wax crayons in many colours - he said colour stirs the mind, that work on even the most difficult of cases becomes akin to playing. And because a case map is an act of creation, we bring the full breadth of our curiosity to the task.”

The investigation expands when a second Belgian refugee, Albert Durant, is executed in the same manner.

Surely there is a connection. Maisie, Billy and Sandra delve deep into the refugee world of the First World War. I cannot recall the last mystery I read that explored how thousands of Belgians and French fled advancing German armies and found refuge in England. There were so many that Belgian refugee villages were established for the duration of the war.

And the violence does not end. A brutal clever killer is at work.

Maisie and Billy follow leads around London and into the country.

Maisie’s training as a psychologist aids her in dealing with a small girl sent to the countryside who will not speak and who appears to have been sent to the wrong location. Thousands of English children are being sent from the major cities to live in the countryside. Maisie’s heart aches over the stillbirth of the child she and James conceived. The lost girl tugs at her. When her father draws her to talk again all are left emotional. Yet her father and stepmother worry Maisie’s heart will be broken again.

At the same time everyone is joining up to serve their country. In the family of Maisie’s close friend Priscilla, her husband is joining the Ministry of Information, their oldest son has enlisted in the RAF, the second oldest wants to be a sailor, her French speaking nanny has signed up to be an interpreter and Priscilla is ready to be an ambulance driver.

Though 21 years have passed since the end of the Great War, Winspear continues to find credible ways to connect the mysteries of the series with that war.

Few series can move convincingly through history. Including Maisie’s childhood the books have covered the opening 39 years of the 20th Century.

In This Grave Hour is a satisfying return to excellence.