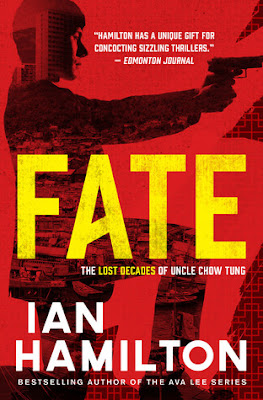 (23. - 1048.) Fate by Ian Hamilton - “Uncle” Chow Tung was a powerful presence in the Ava Lee series as he mentored the young accountant turned sleuth. He had great dignity and commanded respect. Yet there was a profound sadness about his personality. The opening pages of Fate explain why. In 1959, desperate to escape Mao’s Great Leap Forward, Chow and his intended wife, Lin Gui-San, join a small group intent on swimming 4 kilometres from the mainland to freedom in Hong Kong. Gui-San does not make it.

By 1959 Chow has reached the position of White Paper Fan (administrator) in the Fanling organization of triads in the New Territories of Hong Kong. Chow’s natural gravitas and thoughtful nature has gained him the honorific of “Uncle” even among men his own age.

Chow lives a simple life. His apartment is spartan. He wears a black suit with a crisp white shirt every day. He has congee early every morning at a neighbourhood restaurant.

Chow has a single indulgence. He faithfully attends the horse races at the Happy Valley Racetrack run by the Hong Kong Jockey Club. Each week he pores over the racing form carefully analyzing and weighing the horses and then placing his bets. It is his escape from the demands of triad work. It is no surprise he is a successful bettor.

Chow’s restless clever mind seeks out new opportunities for the triad. Some of the triad’s leaders, reflecting the conservative nature of traditional organizations, question new ventures which inevitably have risk.

Chow sees an opportunity to move from just obtaining “protection” money from merchants to  opening a night market where they could rent out stalls and provide knockoff merchandise to vendors.

While the leadership of the triads is considering the venture, their Mountain Master (leader), Gao, is killed in a hit-and-run by an unmarked white van. Chow is doubtful it was an accident yet it is not one of the ordinary methods of a triad assasination.

Determined to do what is best for the organization rather than simply follow the tradition of having the Deputy Mountain Master, Ma, appointed Mountain Master  he leads the way in requiring a vote of the 162 members on who will be Mountain Master.

Chow assists in the planning of the lavish funeral of Gao that will include 3 bands from the Fanling triads in the procession.

At the same time a credible rumour reaches Chow that a neighbouring organization of triads is behind the killing of Gao and are launching a takeover of the Fanling triad.

Chow considers the conflicting information on the intentions of other triad organizations.

There is additional unexpected violence.

Chow seeks a resolution that is not violent but he is a man of principle who will stand his ground.

Chow is not impulsive. He is decisive and he will be ruthless in dealing with anyone who breaks the sacred oath “to protect our brothers above all, even at the cost of our own lives”.

Chow is a leader for whom men will go to war. They know they can trust him.

The story pounds to the ending.

While there is a constant undertone of threat, violenc is used sparingly. I was reminded of the early Ava Lee books where the intelligence of “Uncle” Chow was pivotal to the plot.

As always, the pages of a Hamilton mystery race by. I read the book in two days. Fate is the opening book in a trilogy. I wish I could read them all together. I am going out looking for Foresight which is the second in the series and published earlier this year. Fate was on the shortlist for the 2020 Arthur Ellis Award for Best Canadian Crime Fiction novel. It is a worthy book to be considered for the Award.