The Corpse With the Iron Will by Cathy Ace 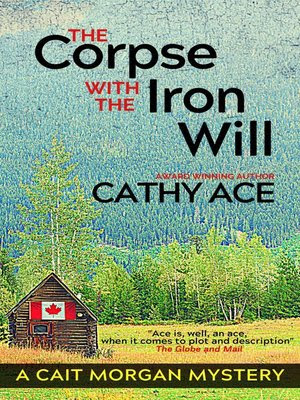 Gordy had lived simply with aging appliances, a woodstove, a radio, no television and several thousand books.

With no known relatives and no closer friends, Cait and Bud decide to clean up his house a bit and check Gordy’s papers. They are soon summoned to the office of Gordy’s lawyers in nearby Mission, British Columbia. He has left hand printed letters to a number of area residents with comments and requests. Included are Cait and Bud. I was fascinated. I have never had a client leave behind a group of letters to be distributed after death.

Cait, a professor and victim profiler, and Bud, a retired homicide investigator, are ready to honour his directions to them.

Gordy turns out to be far more than a friendly quirky neighbour. Bud and Cait have their own quirk. They refer to each other as “Husband” and “Wife”.

They are surprised to learn he was one of many Saskatchewan residents who moved west from the 1950’s onward, usually for greater economic opportunities.

When diaries covering decades are found, Cait dives into Gordy’s life and I was anxious to find out what she discovered. She can process what she has read quickly for her eidetic memory lets her make mental rather conventional written notes.

Gordy was deeply involved in breeding plants in their area of Southwestern British Columbia.

With her quick mind Cait can be brusque. She has few good friends.

Being designated to give Gordy’s eulogy gives Cait a clever means of asking questions about Gordy and his relationships.

I enjoyed the characterizations and descriptions. I was not fond of the ending.

Ace is a gifted writer and Cait an interesting sleuth. I plan to read more in the series.

The Corpse With the Iron Will was another good choice for the shortlist for Best Canadian Crime Novel Set in Canada.