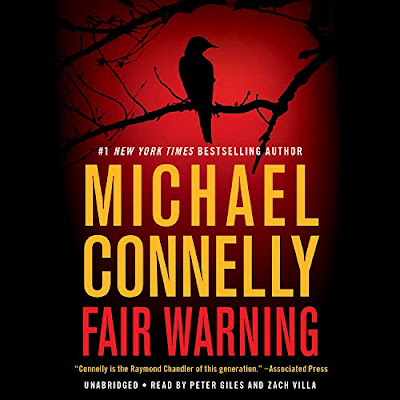 Fair Warning by Michael Connelly - Connelly does not write many books with a message. In Fair Warning he clearly fears the risks of information gathered from personal DNA tests for genealogical or personal reasons being compromised. Evil is about.

McEvoy was the journalist in an earlier “message” book, The Scarecrow, where the issue was the collection of vast amounts of information in data farms.

Connelly continues to describe the downsizing of traditional newspapers and the efforts, somewhat desperate, of terminated journalists trying to create their own online news organizations.

McEvoy is working for Fair Warning which is a small consumer product investigation site which seeks to place stories in partnership with such organizations as the Los Angeles Times. Such partnerships allow the Times to avoid the costs of salaried sources of stories.

When a pair of LAPD detectives aggressively question him over the death of Tina Portrero he reacts by pursuing what happened to her.

The actions of the detectives are portrayed as intrusive and insulting. Harry Bosch is also aggressive. His actions are justified as leading to killers. Depending on whether the character is the good police officer or the bad police officer will be the interpretation of comparable actions.

As McEvoy delves into Portrero’s life he finds she was concerned about cyber stalking. Once again depending on whether the internet searcher is good or bad will result in an assessment of whether the searcher is a researcher or a predator.

What reflects the genius of Connelly is that he takes her method of death, Atlanto-occipital dislocation (AOD), where the head is twisted until the spinal column is broken and turns it into the pivotal fact for the investigation. In Potrero’s death the killer has manually snapped her neck.

McEvoy, cleverly using the internet, finds there are a number of such deaths.

His further investigation takes him into the world of personal genetic testing. It was frightening to read of the lack of regulation with regard to the sale of such information by the companies to which samples are sent for analysis. We have seen the use of such data for public benefit such as the finding of the Golden State killer but what about potentially wicked uses of the data.

Former FBI agent, Rachel Walling, who is also a former McEvoy lover is re-introduced in a somewhat awkward way to the story. It was unconvincing how she was used to liaise with her former employer and how much they were willing to share with McEvoy.

As with the villains of his recent books we learn little about the character Shrike in Fair Warning. The Shrike is an almost satanic figure who causes nightmares.

The first half of the book did not grip me in the way most Connelly books have me anxiously reading to see what happens next in the story. I was absorbed in the second half as the chase accelerated. I thought for a few pages it might be like The Poet in leaving resolution with regard to the killer to another book. It had a climactic ending which would be a dandy Hollywood movie finish.