To Die But Once by Jacqueline Winspear 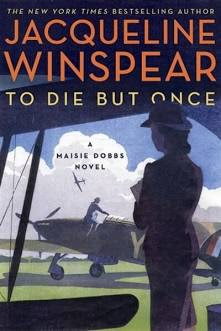 (16. - 1088.) To Die But Once by Jacqueline Winspear - It is May of 1940 and a new generation has stepped forward for war. Billy Beale’s son, young Billy, is with the British Expeditionary Force in France. Young Joe Coombes from the local pub is painting RAF bases with fire retardant paint. Priscilla’s oldest, Tom, is in the RAF. Her 16 year old, Tim, desperately wants to “prove himself” in the service of his country. Unlike contemporary wars the young from the English upper classes through those of working families sign up.

As the German armies press the British Expenditionary Force to the French coast Billy is deeply worried about our Billy. The Coombes, Phil and Sally, are equally concerned about a lack of contact from Joe.

When Joe is found dead on a railroad track Maisie feels compelled to find out what happened. The police, with all the issues of the war, can devote little time to the apparent accidental death of a teenager in the countryside.

As this new loss is absorbed Maisie’s mother-in-law, Rowan, expresses her long frustration over her son, James, risking and losing his life flying when Maisie was pregnant. Maisie tells her:

James died doing something he loved, and we all adored him for his passion. He chose to be an aviator, and chose to test a new fighter aircraft for the government - it was a fateful day and it changed all our lives. Yet it serves no one to go back and forth trying to apportion blame. Forgive yourself, Rowan. Forgive yourself and set yourself free of this blame, of regret.”

Regular trains are delayed by the troop trains bringing back troops evacuated from Dunkirk. Initially the English people were not told of the extent of the crisis. Only when the government realized it could not rescue the army with naval ships did the call go out for “pleasure craft” and “able-bodied men” and the civilian armada was created that crossed the English Channel to the beaches.

The anxiety level of the nation ratchets up as virtually everyone knows someone on the beaches or in the boats gone to pick them up.

The stress becomes almost unbearable when Priscilla and Maisie determine Tim and his 16 year old friend, Gordon, have taken Gordon’s family boat to Dunkirk. Reading of the  continuing fear of the families, for there is no communication possible, brought alive how agonizing it was during WW II for those on the home front worrying about their loved ones.

While they are now the older generation Priscilla and Maisie will do their bit for the war effort. They have signed up to be volunteer ambulance drivers in London. Readers with any knowledge of history cannot help but dread what they will experience in the Blitz. For now they are splitting time between London and the country trying to enjoy a fine summer.

Maisie has fallen in love. Originally she took over guardianship of the little girl, Anna, who lost her mother and grandmother and whose father had long ago returned to Malta. Anna had been sent to the countryside in the previous book, In This Grave Hour, with thousands of children for safety. Now Maisie desperately wants to adopt her. Bureaucracy, even or maybe especially in war, is making it difficult for Maisie to adopt as she is considered a single woman. Being widowed is a cruel disadvantage.

There is a most unusual subplot. I never knew the Bank of England essentially moved to the countryside during the war with most bank notes being made in Hampshire. And more banknotes than usual needed to be printed as existing notes were so constantly in circulation they wore out faster than in peacetime. It was interesting though a touch contrived to fit into the story.

All the books in the series are good but To Die But Once is not one of the best. The murder investigation gets lost at times in the personal dramas of the characters. There is not the flair and insight I am accustomed to from Maisie. She is a bit too much the bystander for me.

Maisie, now 43, is gradually becoming part of the Establishment. She can easily afford an investigation with no paying client. While she avoids using her title her friends and associates are increasingly members of the upper classes. Being an upper class sleuth is an English fictional tradition but if Maisie is to be a mother will being a detective also count against her in the adoption process?