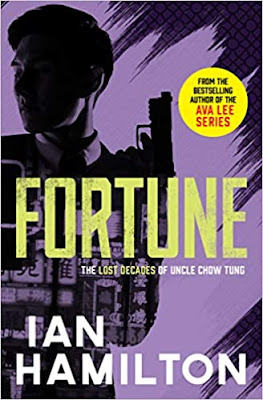 (15. - 1087.) Fortune by Ian Hamilton - Uncle remains the most calculating Mountain Master in the Hong Kong triads.

He will need all his skills in communication, negotiation, compromise and violent reaction when killings in Macau spill over to Hong Kong and are intertwined with the coming Communist China takeover of Hong Kong in 1997 two years away.

Ten years of co-existence between the triads is threatened by intrigues between some of the Mountain Men who conspire to take over smaller triad organizations.

Always valuing information Uncle reaches out to his contacts in the other triad organizations, the Hong Kong police and Communist China bureaucrats. No other triad leader has his breadth of connections.

A direct attack on the Fanling triads challenges Uncle’s position, resolve and determination. It is a mistake by the other Mountain Man. Uncle is unwavering as he prepares an immediate forceful response.

He knows he cannot be passive when his triad is attacked. While Uncle avoids violence as unproductive and disruptive to business he will respond to force with force. Where he differs from most Mountain Masters is that his response will never be a reflexive escalation. Uncle has a talent for swiftly responding to a crisis with a well thought out plan that will use violence as part of a measured plan to inflict maximum pain.

He does not project blustering bravado. The wise realize he has a quiet menace to his personality that is best not provoked. He is not an intellectual unable to spill blood. He speaks frankly to bullies.

His men appreciate his honour of the best in triad traditions and that he will be ferocious if needed. They know he will defend them and support them. They appreciate that he is personally brave. They are devoted to him.

Uncle conceives an approach to minimize inter-triad conflict. Will other Mountain Masters recognize that Uncle is an organizational genius? I thought of Lucky Luciano in the 1930’s setting up the Commission to reduce violence between the Italian crime families of New York and provide a structure for dealing with disputes.

It is the third pivotal moment in Uncle’s career.

In Fate Uncle acted decisively, as a young man, to stave off a threat to the Fanling triads and was elected Mountain Master in recognition.

In Foresight Uncle took a calculated risk in being an early investor in Communist China as the Party opened up economic development.

Now he has a chance to change how triads deal with each other.

The book introduces readers to Sonny Kwok a regular character in the Ava Lee series. It was fascinating to read the back story of the powerful bodyguard of Uncle and later protector of Ava.

I was so caught up in Uncle dealing with his own triads, working to avoid triad wars, facing attacks and negotiating with his rivals, the Hong Kong police and Chinese Communist Party . It was a book I could barely turn the pages fast enough and read the book in just over a day. My previous two posts are reviews of the first two books in the series.