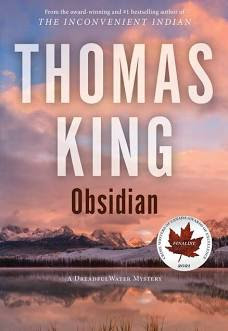 (23. - 1095.) Obsidian by Thomas King - There are many reasons to be depressed in Indian country. Thumps DreadfulWaters has one of the strongest. Six years ago his lover, Anna, and her daughter, Callie, had been murdered by a serial killer on the California coast.

Drawn to return, Thumps has made a pilgrimage from Chinook, Montana to Eureka, California but can bring himself no closer to the death site than a parking lot on the beach.

Thumps had been a deputy sheriff in Eureka at the time of the killings. While back in Eureka he is given boxes of evidence assembled by a former fellow officer who died falling off a ladder. Ron Peat had always believed Thumps would come back to the Obsidian murders. Each victim had a small piece of Obsidian in their mouth. While in California he learns Anna’s ex-husband, Raymond Oakes, who had been imprisoned for murder was released shortly before the deaths.

Reflecting on what to do, Thumps drives back to Chinook. His return home to Montana prompts a vigorous local reaction. Roxanne Heavy Runner leads a group of Indian women who want a page of questions answered by him. His doctor is concerned about his blood tests and wants to send him to a specialist in Helena. His on-again-off-again girlfriend, Chief Claire Merchant wants to know if he wants a committed relationship.. Sheriff Duke Hockney, diagnosed with prostate cancer, wants him to become Sheriff. Thumps wants to find Raymond Oakes.

A group of moviemakers meet with Thumps. They want to make a movie on the Obisidian Murders. They are willing to share information with Thumps in the hope he will pursue the investigation. Thumps hesitates to ally himself with movie people though he had previously participated in a reality T.V. series exploring unsolved murders.

As Thumps considers whether it is time to move on from Chinook, relationships get more complex and, in a fascinating twist, clues in the investigation come to Chinook. A piece of obsidian is left on the Chinook morgue table. Then a replica vintage Mustang painted Osidian black is stolen. And his former colleague from the Eureka Police Department, Leon Ranger, retires and drives his RV east to help Thumps.

King manages the difficult task of making credible information making its way from California to Montana for the California murders. I was at a point where the Chinook storyline was obscuring the murder investigation when I was grateful King returned focus to the mystery. Certainly the issues in Chinook have divided Thumps attention but it was time he concentrated on the investigation.

As they reflect on the evidence with the aid of everyone in town some very interesting premises are advanced as to the killer.

The pace quickens as evidence falls into place.

As usual I had not figured out the killer. I have some mixed emotions over the ending.

Obsidian is a much better mystery than DreadfulWater, the first in the series. I have not read the intervening books. King, a gifted writer, is now also a gifted mystery author. I expect to now go back to read earlier books in the series.

Obsidian was another good choice for the Crime Writers of Canada 2021 shortlist for Best Canadian Crime Novel.