The Boys from Biloxi by John Grisham 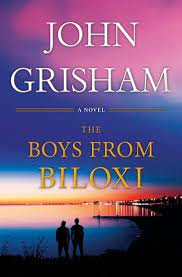 (29. - 1134.) The Boys From Biloxi by John Grisham - Grisham returns to Mississippi but not to Ford County. Biloxi was a wide open raucous city on the Gulf coast of Mississippi through most of the 20th Century. Booze, gambling and girls were readily available. Prohibition was ignored.

While vice was important, the primary industry was canning the abundant seafood of the Gulf. Immigrants especially from Croatia poured into Biloxi.

From humble beginnings the Marco family (most surnames were Anglcized) prospered with bars and a grocery. In the second generation, Lance embraced gambling and prostitution and became the dominant player on “The Strip”.

The Rudy family took a different direction. Jesse Rudy, using his G.I. Bill benefits, gained a university education after WW II. After struggling to get by as a teacher he enrolls in night school and becomes a lawyer.

In the third generation Hugh Marco and Keith Rudy become good friends through playing baseball. By the early 1960’s the boys are in high school.

While interesting the story was plodding abit until Hurricane Camille devastates Biloxi in 1969. In the aftermath, Jesse takes on insurance companies denying coverage as they claim all damage was caused by water damage through storm surge which is excluded by policies rather than wind damage which is included risk. The trials display Jesse’s tenacity and skill in the courtroom.

In the early 1970’s Jesse is elected DA and sets out to clean up the Strip. Sheriff Fats Bowman and Lance lead the opposition. Fats is willfully blind to the illegal activities along the Strip. Lance is determined to protect lucrative businesses.

As they become adults Hugh and Keith join their fathers in the family businesses.

A major fight is inevitable and the book comes alive. Two generations of Biloxi boys face off.

I was startled by the confrontation. Many thriller authors would have shied from the twist.

There is lots of courtroom action in the rest of the plot.

I found it hard to address in a review what happens in the balance of the book because there would be major spoilers. A further post, which includes spoilers, will address Grisham handling difficult issues.

I appreciate Grisham providing portraits of the heroes and the villains. Not enough writers address the personal lives of the wicked.

The Biloxi Boys is not one of Grisham’s best books. It took over 100 pages to really engage me but the story became more and more compelling. Unlike The Judge’s List  I thought the ending of The Biloxi Boys was powerful.