The Law of Innocence by Michael Connelly 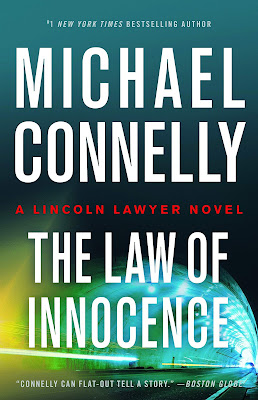 (1. - 1073.) The Law of Innocence by Michael Connelly - When Mickey Haller is stopped for a routine traffic infraction - his licence plate is missing - liquid is dripping from his trunk. Trouble. Sure enough, there is a body in the trunk of his Lincoln Town Car and Mickey is arrested for murder.

Mickey’s defence is hampered because he is in jail in the Twin Towers pending trial. His bail, set by an unfriendly judge, is an exorbitant $5,000,000 meaning a bond would be $500,000. It is too high for Mickey to raise without exhausting his resources. It is a not so subtle commentary on the inequities of the American pre-trial release proceeding when even the well-to-do cannot afford bail.

I was not surprised, though I was dismayed when Mickey decided to defend himself. While the prospects of placing your life in the hands of another is daunting, defending yourself is worse. It is impossible to be objective. It is also hubris to think no other lawyer could do a better job. Fortunately, Mickey is working with his partner, Jennifer Ariston. She has excellent legal skills and more importantly, understands Mickey well enough to to tell him when his hyper-aggressive tactics need to be restrained.

The murder appears spectacularly inept for a defence lawyer with 25 years of experience at the bar. Killing a former client, Sam Scales, in the trunk of your car and driving around Los Angeles for a day with the corpse in the trunk does not make sense for the dimmest citizen let alone a clever man. Mickey has engaged in some sleazy legal tactics but I cannot see him a killer.

I was touched when a former client and Harry Bosch, his half brother and retired LAPD detective, reach out to offer hundreds of thousands of dollars in support of Mickey. Bosch, while still considering defence work the dark side, asks to join the defence team. Mickey is glad to have Bosch on his side.

In the boldest defense strategy possible Mickey invokes the law of innocence. Not content with raising reasonable doubt he seeks the holy grail of innocence:

The law of innocence is unwritten. It will not be found in a leather-bound codebook. It will never be argued in a courtroom. It cannot be written into law by the elected. It is an abstract idea and yet it closely aligns with the hard laws of nature and science. In the play of physics, for every action, there is an equal and opposite reaction. In the law of innocence, for every man not guilty of a crime, there is a man out there who is. And to prove true innocence, the guilty man must be found and exposed to the world.

There is no standard of proof for the law of innocence as it is a concept, as set out above, outside the legal statutes, principles and cases that govern criminal law.

While a righteous defence is good theatre it is the most dangerous approach to a trial for it may tip a jury to a guilty decision if the accused cannot establish their innocence to the satisfaction of the jury.

In The Law of Innocence the prosecutor, Dana “Death Penalty” ---- or the Iceberg, is a zealous prosecutor who considers Mickey one of the lowest forms of life.

Pleading the law of innocence means the defense team must find the real killer, not merely the possible killer. The process is complicated by Scales being a con man. He ran fake charity scams seeking donations for the victims of American tragedies such as mass shootings. He has a series of known aliases let alone his unknown false names. The hardened Mickey eventually quit representing Scales as his schemes were too much for Mickey.

Not all of the book collaborations between the half-brothers has gone well. Here it is very credible.

Both Mickey and Harry, as with other good trial counsel and investigators, obsess over detail. They examine carefully all evidence. Their diligence is rewarded by such flaws as determining the deceased’s wallet went missing after he was taken from Mickey’s car by the police but before there was an inventory of his effects by the detectives.

To add to the stress Mickey insists on a speedy trial which means he has little time to find the real killer before he is on trial for murder.

The trial features Mickey and his co-counsel, a totally unexpected attorney drawn into the case when Jennifer goes to Washington state where her father is an early victim of what turned out to be Covid 19. (The trial takes place in late February of 2020.)

I was glad to see Mickey willing to let co-counsel have a significant role and actually defer to co-counsel on occasion - a major concession for a man with a huge ego.

Connelly keeps the trial moving and the tension building. The State will hammer to the jury every day that Scales was killed in the trunk of Mickey’s car while it was parked in his garage. Pleading reasonable doubt would have been challenging enough but pleading the law of innocence is a huge burden.

The Law of Innocence is an excellent book. It is one of Connelly’s best books. 2021 is off to a great start.