An Image in the Lake by Gail Bowen 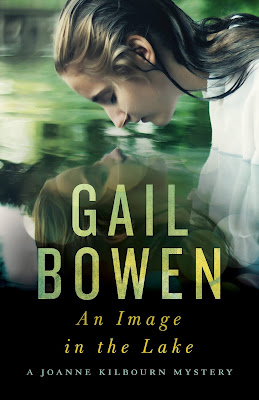 (33. - 1105.) An Image in the Lake by Gail Bowen - MediaNation, a leading Canadian broadcaster, is in turmoil and Joanne Kilbourn knows everybody.

Her son-in-law, Charlie Dowhaniuk, is the star of Charlie D. in the Morning, a national radio show with interviews, music and Charlie’s commentary now being broadcast from Saskatchewan.

Executive producer, Rosemary Morrissey, had deteriorated physically and emotionally and was abruptly forced out.

Executive producer, Ellen Exton, was threatened with the exposure of sexually explicit videos she had sent to a lover. The network, barely over the dismissal of a prominent broadcaster for his sleazy ways (clearly based on a real life Canadian broadcaster) gives her the option of a profitable resignation or a public dismissal. She takes the money and disappears.

With internal conflict leaving MediaNation in Regina bereft of leadership the network assigns Jill Oziowy to take over. Joanne is rarely distraught but the mere mention of Oziowy angers her. Oziowy had been a best friend and godmother to her children when Joanne learned 3 years earlier that Oziowy had been her deceased first husband’s lover for 15 years.

A manipulative 19 year old Clay Fairbairn, is an intern at MediaNation. He is studying journalism and too eager, ethics are of no importance, to gain employment in the broadcast industry.  His doting grandmother, a friend of Joanne, unconcerned about his moral issues, aids his quest.

Another intern, Thalia Monk, who is close to Fairbairn, is the stepdaughter of another friend of Joanne. She is both brilliant and bedeviled.

The four interns are a cohort. They are clever, potentially wicked and enjoy reading Nietsche. Not every young person is  sensitive and caring. Gail has created a striking quartet of young characters.

At the same time Saskatchewan is gearing up for a provincial election. Joanne is impressed by the new leader of her progressive party, Alison Janvier. I was glad to see Joanne return to the campaign trail. The political themes have always worked better for me than the broadcast industry intrigues as they are distinctly Saskatchewan plot lines. I wish the election had played a greater role in the book

Joanne and her husband, Zack, attend a political picnic with her grandchildren instead of her children. Their enthusiasm in taking selfies with Janvier reminded me of photographic change. Where people once thronged to have their photo taken next to a politician and then printed and framed the selfie digital image has taken over.

Life is good for Joanne’s children but just when I thought the family was too perfect, her adopted daughter Taylor, returns or more accurately retreats to Regina with a broken heart.

The lake cottages at Lawyer’s Bay are a place of respite for the characters as they deal with the issues of relationships, the problems at MediaNation and the consequences of a sudden death.

As a Christian Joanne strives to find forgiveness. In a moving scene she makes “a pot of tea - my grandmother’s panacea for all life’s problems” and sets about a reconciliation with Jill.

As Joanne wrestles with the issues of today the T.V. series based on her difficult youthful past, Sisters & Strangers, is broadcast. It has its greatest impact on those around Joanne rather than upon herself.

Not every ending of the books in the series has been a strength but the conclusion of An Image in the Lake was right. The resolution of the murder was plausible and sad. Joanne’s efforts to make amends for the characters reminded me of Maisie Dobbs in the Jacqueline Winspear series. There was a powerful psychological uplift, even healing, through a transcendent work of art for Zack still devastated by the deaths of his partners a few books ago.

Joanne and Zack share Thanksgiving with 9 members of their family and 8 good friends. I wish more sleuths had such celebrations.