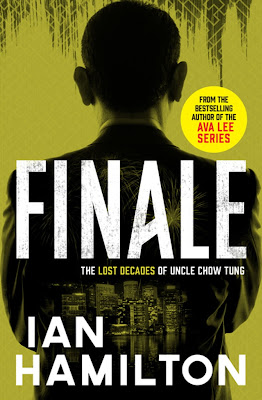 (19. - 1124.) Finale by Ian Hamilton - Uncle is ailing. It is 2015. The former triad leader and business partner of Ava Lee has been diagnosed with late stage stomach cancer. With his
characteristic fortitude and common sense he decides to undertake chemotherapy. At the same time his modesty and fierce sense of privacy leads him to hide the diagnosis from those who love and care for him.

To do the review I wanted there are spoilers in this post. I do not think they will spoil reading Finale but wanted to provide a warning of their presence.

As set out in the earlier books of The Lost Decades of Uncle Chow Tung he had fled China in 1959 and successfully moved up the ranks of the Fanling Triads to become their Mountain Master. He led Fanling Triads to great success for 30 years. For 10 more years he established and led a council of the combined Hong Kong triad gangs. Then he established his debt recovery business with Ava Lee.

With this book we are reliving events told in books of the Ava Lee series. Uncle’s back story has caught up with the Lee books where his illness was an important part of several plots.

In Finale the story involves the events of The Scottish Banker of Surabaya and The Two Sisters of Borneo from Uncle’s perspective. I found it fascinating seeing Uncle’s actions and reactions while knowing what is to come from reading those books.

The detail in Uncle’s treatment and his bodily and mental reactions are intense. Facing debilitating medical treatments and the probabilty of death tries any soul. Uncle is a brave man who follows the principles of Tao. He does not seek out death but he does not fear dying.

Uncle remains a reserved man. He has deep emotions but they have rarely been revealed in earlier books except with regard to his lost love, Gui-San, who died on their swim to freedom from mainland China to Hong Kong. He cherishes her memory. He never sought another romantic relationship.

Through almost six decades of his life in Hong Kong he has cared deeply for his brother Fanling triads. Rarely was his love for them expressed in words or physical displays of affection.

He has made a personal fortune but always shared generously with his brother triads. He established a reserve fund totalling five years of expenses to meet contingencies.

Uncle showed his absolute loyalty to his brother triads through his actions. If his gang faced trouble he was ready to meet the challenge. When physical confrontations took place he was at the front of his men. When there was an assassination attempt upon him when he was in his early 60’s by three triads of another gang he refused to run but was ready to fight if his bodyguard, Sonny, had been unable to subdue them. His fellow gang members revered him.

Too few leaders in our world are committed to the greater good.

Meeting Ava in his 70’s was an unexpected joy. A protege, both smart and brave, who was imaginative and skilled at physical combat.

In Finale he gradually - reluctantly - gives way on his carefully guarded privacy as his health declines. Approaching death lets him express his love for Ava. He speaks of her as the granddaughter he never had.

Yet Uncle will not go quietly into the night. In his final days he is as decisive as ever in securing the future of the triads and then using his contacts to save Ava who has been kidnapped.

Hamilton created a character in Uncle who is as compelling as Ava. It takes a great writer to get readers to respect and to care about and to want to read about a little old man. In an era where thriller fiction is dominated by brash, often arrogant, physically outsize figures Hamilton shows how a man of intelligence and strong character can be a hero. Especially now that I am in my senior years Uncle inspires me.